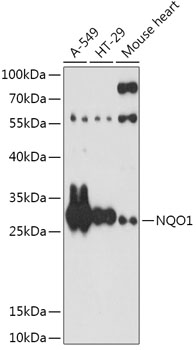 This gene is a member of the NAD(P)H dehydrogenase (quinone) family and encodes a cytoplasmic 2-electron reductase. This FAD-binding protein forms homodimers and reduces quinones to hydroquinones. This protein's enzymatic activity prevents the one electron reduction of quinones that results in the production of radical species. Mutations in this gene have been associated with tardive dyskinesia (TD), an increased risk of hematotoxicity after exposure to benzene, and susceptibility to various forms of cancer. Altered expression of this protein has been seen in many tumors and is also associated with Alzheimer's disease (AD). Alternate transcriptional splice variants, encoding different isoforms, have been characterized. 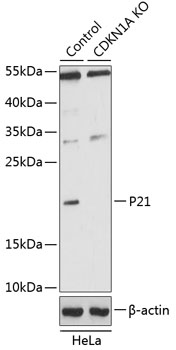 This gene encodes a potent cyclin-dependent kinase inhibitor. The encoded protein binds to and inhibits the activity of cyclin-cyclin-dependent kinase2 or -cyclin-dependent kinase4 complexes, and thus functions as a regulator of cell cycle progression at G1. The expression of this gene is tightly controlled by the tumor suppressor protein p53, through which this protein mediates the p53-dependent cell cycle G1 phase arrest in response to a variety of stress stimuli. This protein can interact with proliferating cell nuclear antigen, a DNA polymerase accessory factor, and plays a regulatory role in S phase DNA replication and DNA damage repair. This protein was reported to be specifically cleaved by CASP3-like caspases, which thus leads to a dramatic activation of cyclin-dependent kinase2, and may be instrumental in the execution of apoptosis following caspase activation. Mice that lack this gene have the ability to regenerate damaged or missing tissue. Multiple alternatively spliced variants have been found for this gene. 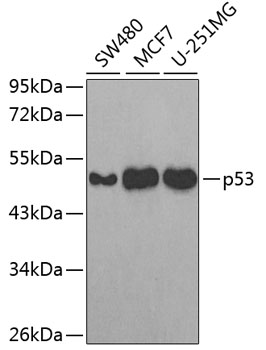 This gene encodes a tumor suppressor protein containing transcriptional activation, DNA binding, and oligomerization domains. The encoded protein responds to diverse cellular stresses to regulate expression of target genes, thereby inducing cell cycle arrest, apoptosis, senescence, DNA repair, or changes in metabolism. Mutations in this gene are associated with a variety of human cancers, including hereditary cancers such as Li-Fraumeni syndrome. Alternative splicing of this gene and the use of alternate promoters result in multiple transcript variants and isoforms. Additional isoforms have also been shown to result from the use of alternate translation initiation codons from identical transcript variants (PMIDs: 12032546, 20937277). 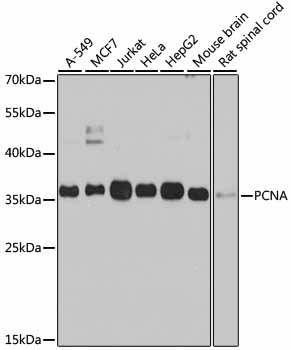 The protein encoded by this gene is found in the nucleus and is a cofactor of DNA polymerase delta. The encoded protein acts as a homotrimer and helps increase the processivity of leading strand synthesis during DNA replication. In response to DNA damage, this protein is ubiquitinated and is involved in the RAD6-dependent DNA repair pathway. Two transcript variants encoding the same protein have been found for this gene. Pseudogenes of this gene have been described on chromosome 4 and on the X chromosome. 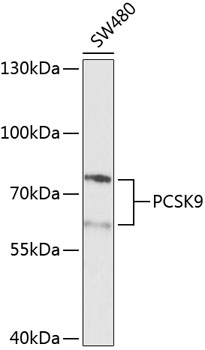 This gene encodes a member of the subtilisin-like proprotein convertase family, which includes proteases that process protein and peptide precursors trafficking through regulated or constitutive branches of the secretory pathway. The encoded protein undergoes an autocatalytic processing event with its prosegment in the ER and is constitutively secreted as an inactive protease into the extracellular matrix and trans-Golgi network. It is expressed in liver, intestine and kidney tissues and escorts specific receptors for lysosomal degradation. It plays a role in cholesterol and fatty acid metabolism. Mutations in this gene have been associated with autosomal dominant familial hypercholesterolemia. Alternative splicing results in multiple transcript variants.

The protein encoded by this gene is a member of the serpin family, although it does not display the serine protease inhibitory activity shown by many of the other serpin family members. The encoded protein is secreted and strongly inhibits angiogenesis. In addition, this protein is a neurotrophic factor involved in neuronal differentiation in retinoblastoma cells. 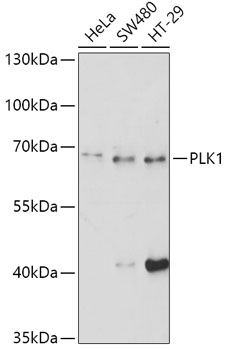 The Ser/Thr protein kinase encoded by this gene belongs to the CDC5/Polo subfamily. It is highly expressed during mitosis and elevated levels are found in many different types of cancer. Depletion of this protein in cancer cells dramatically inhibited cell proliferation and induced apoptosis; hence, it is a target for cancer therapy. 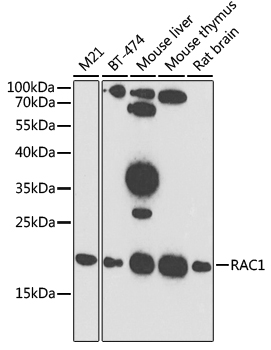 The protein encoded by this gene is a GTPase which belongs to the RAS superfamily of small GTP-binding proteins. Members of this superfamily appear to regulate a diverse array of cellular events, including the control of cell growth, cytoskeletal reorganization, and the activation of protein kinases. Two transcript variants encoding different isoforms have been found for this gene.

The protein encoded by this gene is a member of the S100 family of proteins containing 2 EF-hand calcium-binding motifs. S100 proteins are localized in the cytoplasm and/or nucleus of a wide range of cells, and involved in the regulation of a number of cellular processes such as cell cycle progression and differentiation. S100 genes include at least 13 members which are located as a cluster on chromosome 1q21. This protein may function in motility, invasion, and tubulin polymerization. Chromosomal rearrangements and altered expression of this gene have been implicated in tumor metastasis. Multiple alternatively spliced variants, encoding the same protein, have been identified. 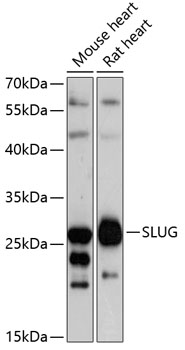 This gene encodes a member of the Snail family of C2H2-type zinc finger transcription factors. The encoded protein acts as a transcriptional repressor that binds to E-box motifs and is also likely to repress E-cadherin transcription in breast carcinoma. This protein is involved in epithelial-mesenchymal transitions and has antiapoptotic activity. Mutations in this gene may be associated with sporatic cases of neural tube defects. 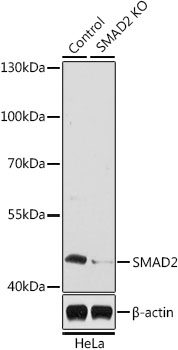 The protein encoded by this gene belongs to the SMAD, a family of proteins similar to the gene products of the Drosophila gene 'mothers against decapentaplegic' (Mad) and the C. elegans gene Sma. SMAD proteins are signal transducers and transcriptional modulators that mediate multiple signaling pathways. This protein mediates the signal of the transforming growth factor (TGF)-beta, and thus regulates multiple cellular processes, such as cell proliferation, apoptosis, and differentiation. This protein is recruited to the TGF-beta receptors through its interaction with the SMAD anchor for receptor activation (SARA) protein. In response to TGF-beta signal, this protein is phosphorylated by the TGF-beta receptors. The phosphorylation induces the dissociation of this protein with SARA and the association with the family member SMAD4. The association with SMAD4 is important for the translocation of this protein into the nucleus, where it binds to target promoters and forms a transcription repressor complex with other cofactors. This protein can also be phosphorylated by activin type 1 receptor kinase, and mediates the signal from the activin. Alternatively spliced transcript variants have been observed for this gene. 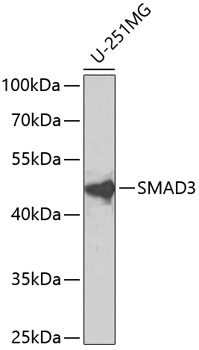 The protein encoded by this gene belongs to the SMAD, a family of proteins similar to the gene products of the Drosophila gene 'mothers against decapentaplegic' (Mad) and the C. elegans gene Sma. SMAD proteins are signal transducers and transcriptional modulators that mediate multiple signaling pathways. This protein functions as a transcriptional modulator activated by transforming growth factor-beta and is thought to play a role in the regulation of carcinogenesis. 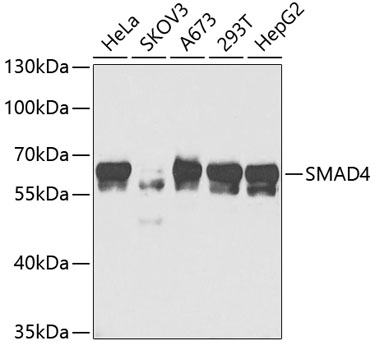 This gene encodes a member of the Smad family of signal transduction proteins. Smad proteins are phosphorylated and activated by transmembrane serine-threonine receptor kinases in response to TGF-beta signaling. The product of this gene forms homomeric complexes and heteromeric complexes with other activated Smad proteins, which then accumulate in the nucleus and regulate the transcription of target genes. This protein binds to DNA and recognizes an 8-bp palindromic sequence (GTCTAGAC) called the Smad-binding element (SBE). The Smad proteins are subject to complex regulation by post-translational modifications. Mutations or deletions in this gene have been shown to result in pancreatic cancer, juvenile polyposis syndrome, and hereditary hemorrhagic telangiectasia syndrome.

This gene encodes a member of the STAT-induced STAT inhibitor (SSI), also known as suppressor of cytokine signaling (SOCS), family. SSI family members are cytokine-inducible negative regulators of cytokine signaling. The expression of this gene is induced by various cytokines, including IL6, IL10, and interferon (IFN)-gamma. The protein encoded by this gene can bind to JAK2 kinase, and inhibit the activity of JAK2 kinase. Studies of the mouse counterpart of this gene suggested the roles of this gene in the negative regulation of fetal liver hematopoiesis, and placental development. 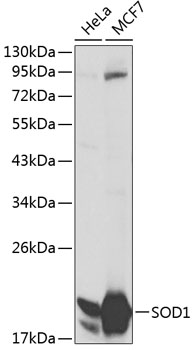 The protein encoded by this gene binds copper and zinc ions and is one of two isozymes responsible for destroying free superoxide radicals in the body. The encoded isozyme is a soluble cytoplasmic protein, acting as a homodimer to convert naturally-occuring but harmful superoxide radicals to molecular oxygen and hydrogen peroxide. The other isozyme is a mitochondrial protein. Mutations in this gene have been implicated as causes of familial amyotrophic lateral sclerosis. Rare transcript variants have been reported for this gene. 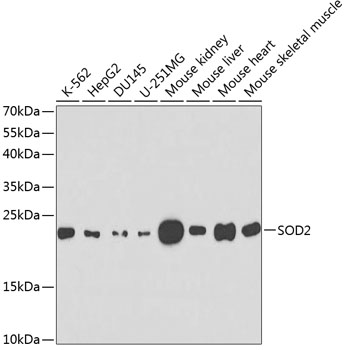 This gene is a member of the iron/manganese superoxide dismutase family. It encodes a mitochondrial protein that forms a homotetramer and binds one manganese ion per subunit. This protein binds to the superoxide byproducts of oxidative phosphorylation and converts them to hydrogen peroxide and diatomic oxygen. Mutations in this gene have been associated with idiopathic cardiomyopathy (IDC), premature aging, sporadic motor neuron disease, and cancer. Alternative splicing of this gene results in multiple transcript variants. A related pseudogene has been identified on chromosome 1. 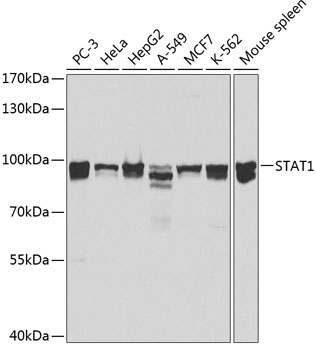 The protein encoded by this gene is a member of the STAT protein family. In response to cytokines and growth factors, STAT family members are phosphorylated by the receptor associated kinases, and then form homo- or heterodimers that translocate to the cell nucleus where they act as transcription activators. This protein can be activated by various ligands including interferon-alpha, interferon-gamma, EGF, PDGF and IL6. This protein mediates the expression of a variety of genes, which is thought to be important for cell viability in response to different cell stimuli and pathogens. Two alternatively spliced transcript variants encoding distinct isoforms have been described.

The protein encoded by this gene is a member of the STAT protein family. In response to cytokines and growth factors, STAT family members are phosphorylated by the receptor associated kinases, and then form homo- or heterodimers that translocate to the cell nucleus where they act as transcription activators. This protein is activated through phosphorylation in response to various cytokines and growth factors including IFNs, EGF, IL5, IL6, HGF, LIF and BMP2. This protein mediates the expression of a variety of genes in response to cell stimuli, and thus plays a key role in many cellular processes such as cell growth and apoptosis. The small GTPase Rac1 has been shown to bind and regulate the activity of this protein. PIAS3 protein is a specific inhibitor of this protein. Mutations in this gene are associated with infantile-onset multisystem autoimmune disease and hyper-immunoglobulin E syndrome. Alternative splicing results in multiple transcript variants encoding distinct isoforms. 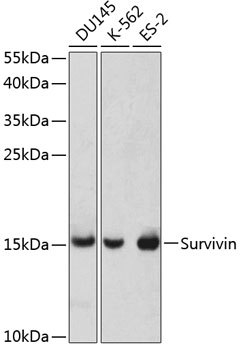 This gene is a member of the inhibitor of apoptosis (IAP) gene family, which encode negative regulatory proteins that prevent apoptotic cell death. IAP family members usually contain multiple baculovirus IAP repeat (BIR) domains, but this gene encodes proteins with only a single BIR domain. The encoded proteins also lack a C-terminus RING finger domain. Gene expression is high during fetal development and in most tumors, yet low in adult tissues. Alternatively spliced transcript variants encoding distinct isoforms have been found for this gene. 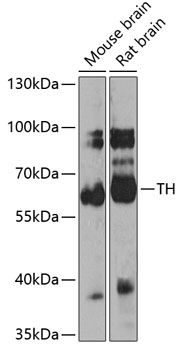 The protein encoded by this gene is involved in the conversion of tyrosine to dopamine. It is the rate-limiting enzyme in the synthesis of catecholamines, hence plays a key role in the physiology of adrenergic neurons. Mutations in this gene have been associated with autosomal recessive Segawa syndrome. Alternatively spliced transcript variants encoding different isoforms have been noted for this gene.