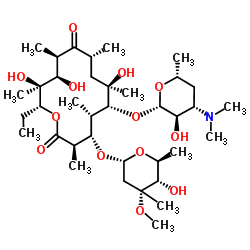 Protocol for preparation of a 50 mg/ml Erythromycin stock solution.