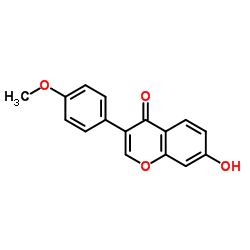 Formononetin is an isoflavonoid phytoestrogen that is used in microbiology and oncology research as a vasodilator, anti-viral, anti-inflammatory and anti-cancer agent. It has also been used as an anti-parasitic compound against Giardia lamblia trophozoites however, the mechanism of action is not well understood.

As an anti-viral, formononetin is used to suppress inflammation caused by neurotropic viruses. Studies on enterovirus 71 have shown formononetin to inhibit cyclooxygenase-2 (COX-2) in the prostaglandin synthesis pathway. Inhibition of this enzyme prevents prostaglandin E2 from stimulating viral replication through cAMP signaling in infected host cells.

Formononetin has also been used in vivo to induce large-arterial relaxation within rats by blocking calcium channels and activation of guanylate cyclase which stimulates protein kinase G and subsequently calcium reuptake. Both mechanisms of action remove calcium used for smooth muscle contraction within the rats but, opposite effects were observed in different species.

Formononetin has also been shown to inhibit nitric oxide generation in vitro on mouse macrophages. Nitric oxide is used by the immune system as a free radical and promotes vasodilation. Inhibition of free radicals also allow formononetin to act as an anti-cancer agent due to antioxidant effects of terminating free radicals. Radicalization of formononetin is stable due to resonance structures from carbon rings.