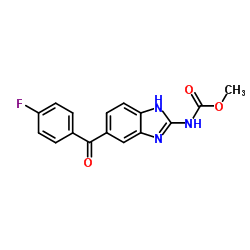 Flubendazole is a benzimidazole compound that is used as an antiparasitic and anti-cancer agent. It has been shown to be an effective anthelminthic chemical by inhibiting tubulin synthesis and disrupting cytoskeleton formation. Flubendazole has also been shown in vivo to be a strong anti-cancer compound by the same mechanism and is potent toward vinblastine resistant cell lines.

Tubulin is vital protein component that provides the structural shape of cells as well as being integral to replication. Halting tubulin formation ruins the structural integrity and dysregulates cytosolic equilibrium. Tubulin inhibition also effects the subfamilies α-tubulin and β-tubulin which facilitate chromosomal migration during cellular replication.