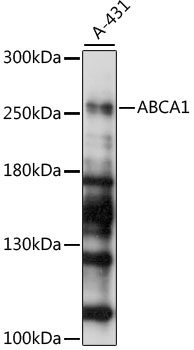 The membrane-associated protein encoded by this gene is a member of the superfamily of ATP-binding cassette (ABC) transporters. ABC proteins transport various molecules across extra- and intracellular membranes. ABC genes are divided into seven distinct subfamilies (ABC1, MDR/TAP, MRP, ALD, OABP, GCN20, White). This protein is a member of the ABC1 subfamily. Members of the ABC1 subfamily comprise the only major ABC subfamily found exclusively in multicellular eukaryotes. With cholesterol as its substrate, this protein functions as a cholesteral efflux pump in the cellular lipid removal pathway. Mutations in this gene have been associated with Tangier's disease and familial high-density lipoprotein deficiency.