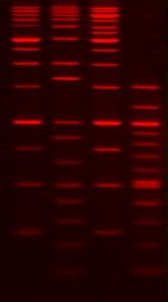 GelRed™ and EtBr have virtually the same spectra, so you can directly replace EtBr with GelRed without changing your existing imaging system. In addition, GelRed™ is far more sensitive than EtBr, which cannot be used in DNA loading buffer to prestain DNA. GelRed™ is compatible with downstream applications such as sequencing and cloning. GelRed™ is efficiently removed from DNA by commercial gel extraction kits or by phenol/chloroform extraction and ethanol precipitation.

A series of safety tests have confirmed that GelRed™ is noncytotoxic, nonmutagenic and nonhazardous at concentrations well above the working concentrations used in gel staining. As a result, GelRed™ can be safely disposed of down the drain or in regular trash, providing convenience and reducing cost in waste disposal.

Product may be shipped at ambient temperature without reducing performance. Please place at the recommended storage conditions upon receipt of the product.

A protocol for the preparation of GelRed™ prestain loading buffer for use in electrophoresis.

DNA Gel Electrophoresis Introduction & Overview
Electrophoresis is a technique where similarly charged molecules in a mixture flow in the same direc...