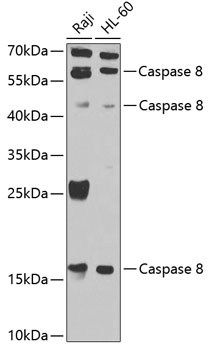 This gene encodes a member of the cysteine-aspartic acid protease (caspase) family. Sequential activation of caspases plays a central role in the execution-phase of cell apoptosis. Caspases exist as inactive proenzymes composed of a prodomain, a large protease subunit, and a small protease subunit. Activation of caspases requires proteolytic processing at conserved internal aspartic residues to generate a heterodimeric enzyme consisting of the large and small subunits. This protein is involved in the programmed cell death induced by Fas and various apoptotic stimuli. The N-terminal FADD-like death effector domain of this protein suggests that it may interact with Fas-interacting protein FADD. This protein was detected in the insoluble fraction of the affected brain region from Huntington disease patients but not in those from normal controls, which implicated the role in neurodegenerative diseases. Many alternatively spliced transcript variants encoding different isoforms have been described, although not all variants have had their full-length sequences determined. [provided by RefSeq, Jul 2008]