How to Prepare Protein Samples for Western Blot

Western blotting is a very common and powerful technique often used worldwide to detect, characterize and quantify proteins. Although common, a Western blot is composed of multiple steps that require careful consideration and planning. First, a protein sample is prepared, then subjected to gel electrophoresis allowing the separation of native or denatured proteins based on size. Next, the proteins are transferred onto a membrane, where an antibody is added to bind to a specific protein, your protein of interest. This antibody-protein complex can then be detected and imaged. Finally, you can complete analysis of the imaged protein (Figure 1 below).

The first step of a Western blot, the sample preparation, is of uttermost importance because the success of later steps in your immunoblotting procedure depends on the proper initial preparation of the protein, which should yield a high amount of the target protein. Western blot can be performed using purified protein samples. However, it is most common to use tissue or cell extracts, which contain a mixture of different proteins.

In the case of tissue or cell extracts, the cells must first be carefully disrupted or lysed to release the proteins without causing degradation or proteolysis. Protein samples from cell extracts, often mammalian cells grown in cell culture, are relatively easy to prepare. Preparing a protein sample from tissue might require a different strategy since tissue is more difficult to disrupt. In addition, the type of sample preparation also depends on the cellular location of the protein (cytoplasmic/soluble or membrane-bound).

It must be noted, however, that all sample preparation, whether from tissue or cells, must be performed as rapidly as possible, at a low temperature (in ice and using chilled equipment) and using the mildest buffer possible to prevent damage or degradation of proteins in the sample.

One of the most important elements of successful lysis is the lysis buffer. The lysis buffer you use largely depends on the localization of your protein of interest (Table 1). Generally, if your protein is cytoplasmic, Tris-HCl lysis buffer (20mM Tris-HCl, pH 7.5) is recommended. If your experiment requires solubilization of your protein, then a harsh buffer containing detergent can be used such as RIPA buffer. RIPA buffer can be used to isolate membrane-bound, cytosolic and nuclear proteins because it contains the denaturant sodium dodecyl sulfate (SDS), which is an ionic detergent capable of solubilizing membrane-bound proteins. This process also results in disruption of protein-protein interactions and denaturing or “unfolding” of the protein.

Alternatively, some proteins only require a mild nonionic detergent like nonidet P-40 (NP-40), which solubilizes both the plasma membrane and membranous organelles leaving the cytoskeleton intact. NP-40 is mild detergent ideal for whole cell lysates, some membrane-bound proteins and cytosolic proteins. If your protein must be extracted from the cytoskeleton (solubilized), then a harsher buffer such as RIPA may be used.

Another detergent that may be used in cell lysis is 3-cholamidopropyl dimethylammonio 1-propanesulfonate (CHAPS), which is a non-denaturing zwitterionic detergent able to solubilize membrane proteins, maintain some protein-protein interactions and disaggregate protein complexes without affecting secondary or tertiary structures. Since CHAPS can disrupt protein-protein interactions, it is not recommended for co-immunoprecipitation experiments.

Mechanical Disruption of Tissues and Cells

In general, disruption of soft tissues and cell cultures can be accomplished with vigorous pipetting. However, as mentioned previously, some tissue samples: liver, muscle and skin, for example, might present a larger challenge when trying to lyse cells and extract proteins.

The breaking up of tissue (homogenization) and disruption of cells may require mechanical disruption in lysis buffer. Tissue can be homogenized using a French Press, glass homogenizer, sonication or mortar and pestle, etc (Table 2). The settings for each of these homogenization instruments varies depending on the type and size of tissue. Notably, the tissue must be kept cool during this homogenization step by performing on ice or using equipment that has a cooling feature.

In the case of the mortar and pestle, solid samples work best, thus, tissue is usually first frozen with liquid nitrogen. This set up is relatively inexpensive but if only a small amount of sample is available, it might be lost during grinding and result in low protein yield. Also, only one sample can be processed at a time, and must be cleaned between samples, making the whole process longer or require multiple mortar/pestle sets.

Glass homogenizers are another option when you must grind tissue. These must also be washed and decontaminated after every use and sample to prevent sample cross-contamination. These are inexpensive, easy to keep chilled and effective with most tissues. However, they may not be efficient with fibrous tissues such as muscle tissue.

Vortexing samples with beads also accomplishes shearing and homogenizing of microorganisms, mammalian cells and soft tissue like mouse brain cortex or adipose tissue. You would need the stainless steel beads and your sample in buffer. This method allows for homogenization of multiple samples and can be arranged in racks. Its disadvantages include limited homogenization of solid samples.

One very common homogenizing instrument commonly used for culture cells is the Dounce homogenizer. Unlike the grinding action of a glass homogenizer, the Dounce homogenizer shears cells leaving subcellular particles intact. This instrument is relatively inexpensive and easy to use. It can also be easily cleaned. However, it is also easily breakable and is not effective for solid pieces of tissue.

The Potter-Elvehjem with Polytetrafluorethylene (PTFE) pestle is a similar instrument to the Dounce homogenizer in that it is inexpensive, easy to use and clean, as well as not recommended for tissue homogenization. It is most commonly used for animal cells. In addition, this instrument utilizes both a shearing and grinding action to achieve homogenization.

The French Press or French Pressure Cell is an old homogenization method, usually used for microorganisms like bacteria or tissue that has been homogenized with a different instrument. Homogenates generated with the French Press are very uniform, however, it is expensive, can only handle small sample volumes and is hard to clean.

Ultrasonic homogenization is another very powerful technique that shears and disrupts cells. Sonication uses ultrasonic sounds waves created with a probe and is recommended for cell suspensions, microorganisms and some tissues. It is not recommended for tougher tissues such as muscle. One disadvantage of this method is the heat that it can generate that if not controlled might lead to protein denaturation.

Another method that has proven effective in breaking up bacteria, mammalian cells and yeast is freeze/thawing. Essentially, cells are frozen and thawed multiple times using dry ice or an ethanol bath. Freeze/thawing is very inexpensive but it can be time consuming and the multiple thawing and freezing might result in protein denaturation.

Keep in mind that plants, bacteria, yeast and fungi have cell walls that must be first disrupted before a detergent can be used to break the cell membrane and release proteins. Mechanical disruption as well as enzymes could be used to break cell walls. The cell walls of yeast, plants, fungi and bacteria can be disrupted using zymolyase, cellulases, chitinases, and lysozymes, respectively. 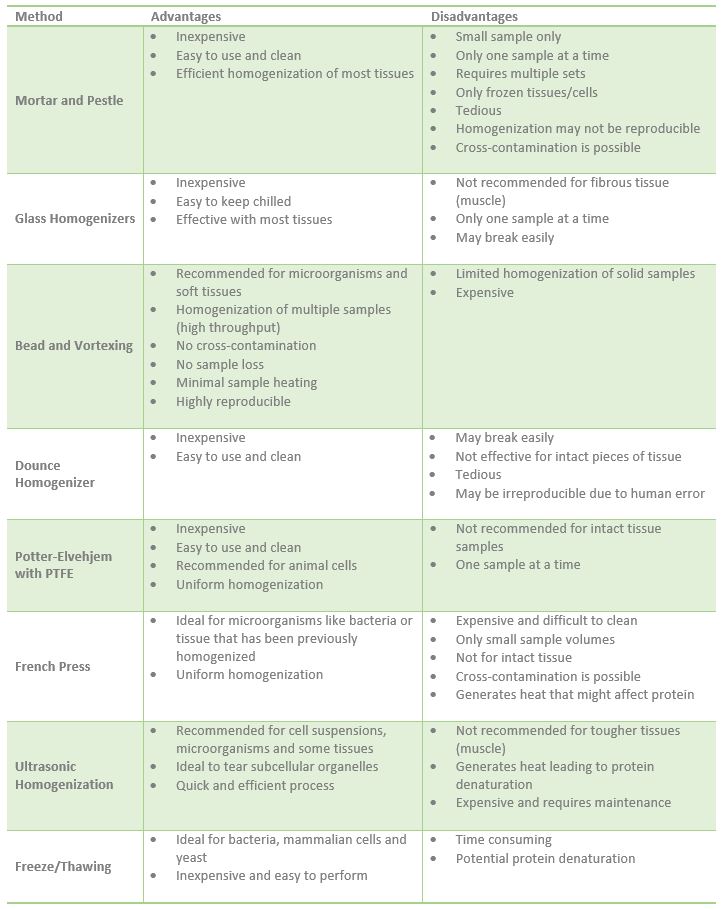 At times, the protein being studied is present at low levels or present in tissues that also express many other proteins making it difficult to detect. In this case, you can use cellular fractionation to isolate specific subcellular components and enrich for your specific protein of interest to try to achieve detection on your Western blot. Subcellular fractionation, the separation of proteins based on their physical properties, is often used to enrich cytosolic, nuclear, membrane bound and mitochondrial proteins and is performed using differential centrifugation and in some cases specific detergents. Knowing the localization and characteristics of your protein is essential since it will guide your choice of buffers as well as homogenization and centrifugation steps.

For example, membrane bound (hydrophobic) proteins may be separated from cytosolic (hydrophilic) proteins by incubating lysed cells with detergents such as Triton-X, TritonX-114, Tween-20 or digitonin among others, resulting in formation of two phases: a hydrophilic phase and a hydrophobic phase. This method can be very efficient in enriching for cytosolic and membrane proteins. However, in some cases, the high amount of detergent needed might interfere with downstream assays. Thus, you may need to remove the excess detergent (Figure 2).

Figure 2. Separation of membrane-bound and cytosolic proteins with detergent.

In some cases, organelles--mitochondria, nuclei, and endoplasmic reticulum—can be separated using centrifugation following homogenization. This process begins by first lysing the cells by homogenization (with a Dounce homogenizer, for example) and then centrifuging the homogenate and subsequent supernatants at low speeds and then at progressively higher speeds. This method does require you to know where your protein is expressed as well as addition of protease and phosphatase inhibitors (Figure 3).

Once a protein extraction is complete, the protein concentration in each sample must be measured to be able to standardize total protein loaded onto each well of the SDS-PAGE gel. Loading equal amounts of total protein into each well ensures accurate quantification in the analysis step of your Western blot. Total protein concentration can be measured using a variety of assays including Bradford, Lowry and bicinchoninic acid (BCA) assay.

In addition, when using these different assays, a standard curve of known protein concentrations should be completed to ensure that the assay is working effectively. Then, a desired concentration must be chosen and all samples must be diluted to this concentration, making sure that protease inhibitors are also added. These samples can then be prepared for SDS-PAGE gel loading or stored at -20°C or -80°C.

Guide to the Disruption of Biological Samples – 2012. (n.d.). Retrieved from https://opsdiagnostics.com/applications/OPSD_2012_Disruption_Guide_v1.1.pdf

Bone Morphogenetic Proteins (BMPs)
The Bone Morphogenetic Proteins (BMPs) were first discovered and named by Marshall Urist in 1965 as...
An Introduction to Primary Antibodies and Secondary Antibodies
A good signal detection is necessary for the reproducibility of research findings when a researcher...
How to Prepare Protein Samples for Western Blot
Western blotting is a very common and powerful technique often used worldwide to detect, characteriz...