The Complicated Artistry of Butterfly Wing Patterns and Colors

Butterfly patterning and coloring comes from a few specific genes; however, it’s not just the genes but also a complex network of regulatory sequences and signaling pathways that lead to diverse, species-specific patterns in butterflies. These interactions instruct pigment coloring, patterning and iridescent qualities.

On a listless Saturday in late July, I happened to notice a large tiger swallowtail butterfly floating in the hot afternoon air. She landed, conveniently, on our butterfly bush and took her time sipping the nectar.

She opened and closed her wings, revealing a mesmerizing pattern of yellow, black veining and gradient blue spots.

All butterfly wings are a natural, geometric display of color and shapes that broadcast so much information – a warning to predators, a method of camouflage, a beacon for a potential mate.

And yet, for all this art that we perceive, it’s really genetics – a very specific recipe mixed with particular instructions that determine the interplay between these genes. A genetic playbook.

What makes understanding this interplay challenging is the fact that just a few signaling pathways conserved across a variety of species are responsible for an extensive range in patterning and coloring ( Mazo-Vargas et al., 2017).

The genes behind butterfly patterning

Let’s begin with the genes behind a butterfly’s pattern and color. There are two genes that play important roles, WntA and optix.

Imagine drawing a picture of a butterfly. Most of us will begin first by sketching it out with a pencil, making sure to detail the outlines of the veins, any eyespots, and other patterns. Once you’re satisfied, you begin filling it in with color, whether using a brush or pencils or markers.

This is sort of how researchers describe the function of the WntA gene and the optix gene.

The WntA gene is responsible for the patterning. It would represent your pencil used for outlining the patterns.

When examining the function of WntA, researchers trying to understand its role did what they do best – they knocked out the gene, or removed it, using CRISPR technology.

What you might imagine is that in all butterflies, the gene would behave the same way. This isn’t the case. Remember there is that paradox where a few conserved pathways rule such wide diversity across several different species.

For instance, in the common buckeye butterfly (genus Junonia), a WntA loss of function led to a loss of the central symmetry system (Mazo-Vargas et al., 2017).

Figure 2 Butterfly species chart. Butterflies in this chart belong to the same family (Nymphalidae). However, each butterfly belongs to a separate genus and species. The familial commonality is important since each of the three belong to Nymphalidae, yet the monarch butterfly doesn’t visibly follow the Nymphalid Ground Plan in that the Central Symmetry System is not visible.

In the forewing of the sara longwing butterfly (Heliconius sara), the WntA loss of function led to a loss of its notable yellow striping (see figure 3).

Figure 3 Conceptual drawing of wild type and WntA (-) H. sara . Loss of function resulted in a loss of the central symmetry system. Another result was the appearance of a red stripe.

To some extent, a loss of wntA led to similar behaviors. However, in species that diverged from the Nymphalid Ground Plan, Mazo-Varges et al. observed different results.

Monarchs are known for their bright orange color that contrasts their black, net-like veins. H. sara is known for having dark wing colors, red speckles on the hindwing (lower wing), and thick yellow stripes.

However, both monarchs and H. sara belong within the same family, Nymphalidae. And while monarchs belong to the same family, their patterning diverges from the Nymphalid Ground Plan (figure 1). For instance, monarch butterflies do not have a visible central symmetry system.

Typically, the white patterns would be thin outline of the veins (hard to see in regular photos but scroll down toward the bottom for figure 10 to see the fluorescent view).

Additionally, knocking out wntA led to an expansion of the monarch’s white dots.

Figure 4 Conceptual illustration comparing wild type monarch patterning with a wntA (-) monarch butterfly. A very thin white line outlines the veins of wild type monarchs. This line is barely visible. A loss of function in wqntA causes the boundaries of that white line to be lost, leading to a white "expansion" around the veins and around the speckles.

So from an artist’s perspective, losing wntA would be like going from sketching with a pencil to drawing your outlines with watercolor paints and a brush.

Now that we’ve talked about the sketching tool, it’s time to dig into the brush and colors. Researchers have found the optix gene is responsible for a butterfly’s color.

Interestingly, this conserved gene was ancestrally expressed in insect eyes. The fact that it plays a role in butterfly color has led some researchers to investigate the concept of recruitment, or co-opting.

To better explain, the optix gene has had a long-standing role within insect eyes. What researchers are interested in understanding is how the gene got from functioning in the eye to also functioning in the wings. In other words, how it was recruited to play a role in wings.

What they believe is that a network including the genes was recruited. Furthermore, researcher Antonia Monteiro believes that an existing gene network in another location, the wing in this case, was being activated by a new regulatory DNA sequence ( Callier, 2018).

But as we’ve established with wntA, what works one way in one species may work another way for a different species.

Optix is no exception. In Heliconius bufferflies, optix is behind the red and yellow wing colors. When this gene is knocked out, the color intensity is lost, and the wings appear almost in gray-scale.

In the common buckeye butterfly (belonging to the genus Junonia), optix is the gene behind their structural colors.

Structural colors are different from pigmented colors in that they rely on structure and light to accomplish a color characteristic (see video below). Think of the iridescent feathers of certain birds, which change in the light.

In other words, it’s responsible for the iridescent nature of the wing scales (lamina) (Marine Biological Laboratory, 2020).

Figure 6 The common buckeye. This variety shows iridescent blue coloring which occurs through the lamina of their wing scales.The color that shows is determined by the thickness of the lamina.

Video This video shows the effect of structural color. Notice the red-spotted purple butterfly's color changes as it moves, and its wings catch the light.

It turns out the common buckeye can produce several colors when the thickness of the wing scales (the lamina) is changed.

To achieve the blue scale coloring, the lamina were 75 percent thicker than the lamina seen in the brown wild type buckeyes.

While optix is one of the genes responsible for regulating lamina structural color, researchers are investigating other genes and gene relationships.

The other side of the coin

In many species, these two sides appear very different from one another. Usually the dorsal side is vibrant, full of those incredible patterns and bright contrasting colors. The ventral side, however, is muted and unimpressive.

Figure 7 Shows the difference between the impressive dorsal side of a butterfly and the muted ventral side.

Researchers believe that each side serves different purposes.

As you might expect, since it’s common within the animal world, one of the roles of the vivid dorsal side is to attract mates. The other role researchers believe is to communicate a warning to predators.

Naturally, this raises the question, what guides this development? What is responsible for instructing the wings to be designed one way on one side, and another way on another side?

One hypothesis is that the gene apterous A is partly responsible for determining the patterning on the dorsal side.

Another result from that deletion is that in male butterflies, a certain gland that is normally found on the ventral side and used during courtship was found on the dorsal side ( Prakash, 2018). These results further lead researchers to believe the apterousA gene is partly involved in determining a butterfly’s dorsal side.

Butterfly color is more than meets the eye

When it comes to butterflies, there is a whole unseen element that might be even more beautiful than we can imagine. This is the world of UV light and color perception.

This visibility lets insects pick up on very minute color differences and patterns that we are unable to see.

In fact, under UV light, many insects and other arthropods fluoresce (glow). Biologist and nature hobbyists Chris Clemens spent time looking at monarch fluorescence during their four stages ( 2015).

Under UV light, a monarch egg shows little, if any, fluorescence. Interestingly, the milkweed leaf it’s sitting on has a very dim red fluorescence. 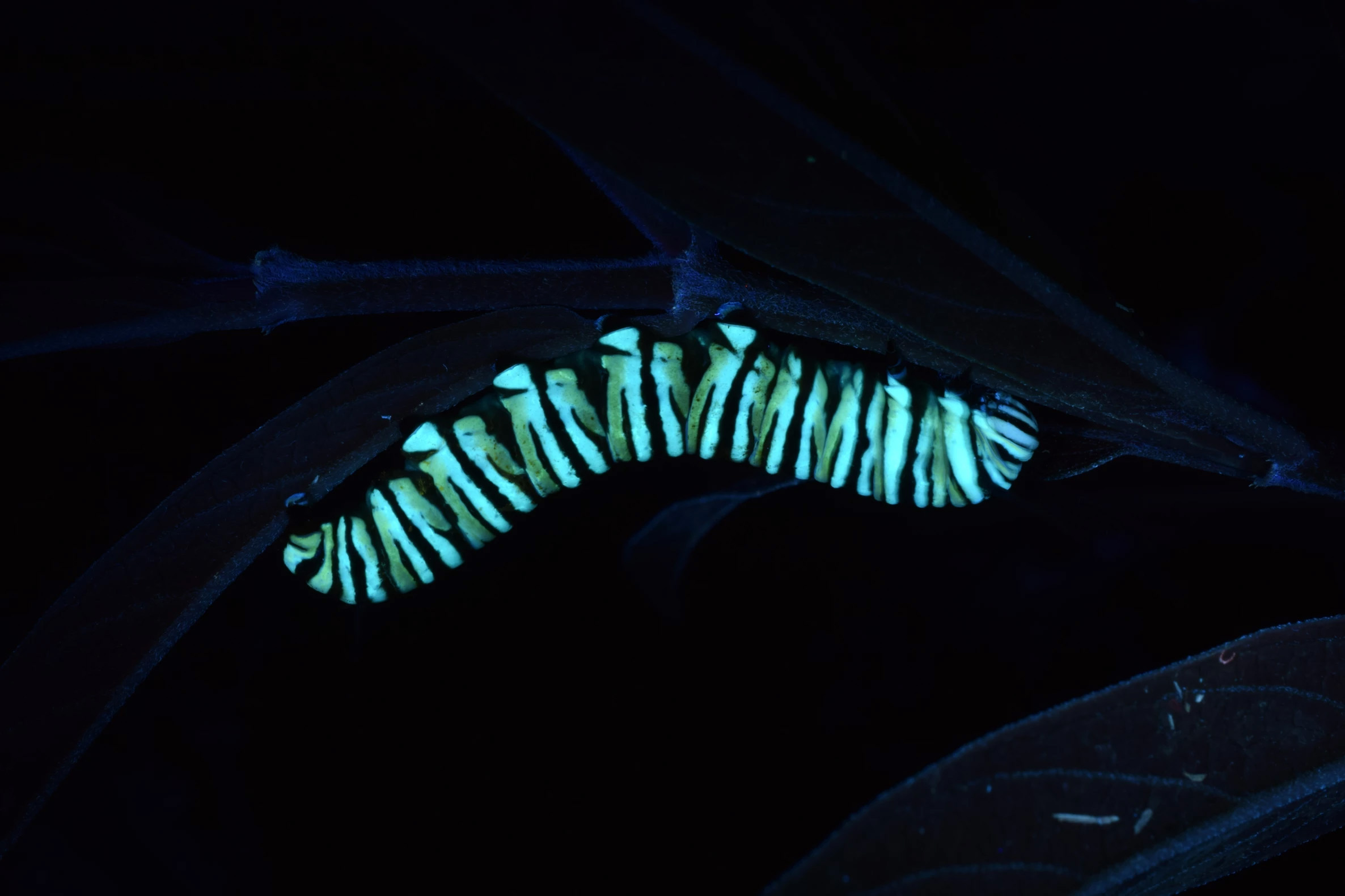 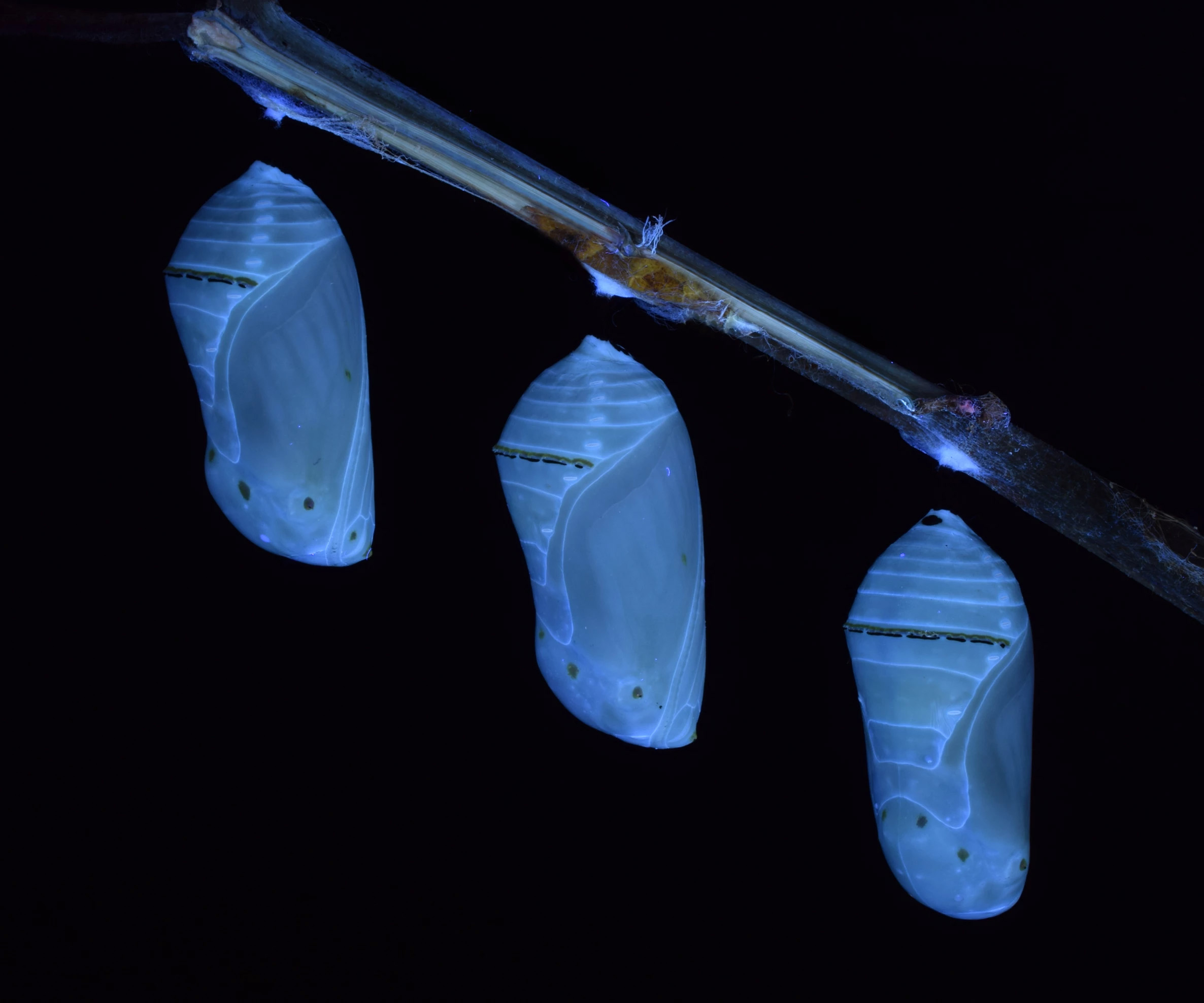 And when the monarch emerges, its famous white speckles are even more incredible, not to mention the white lines around the black veining patterns are more visible.

of a monarch are significantly more visible under UV light. Image via

So what did we learn here?

The personal takeaway from all of this is that along with the beauty of the patterns we see, there is a hidden beauty within the network of genetics and signaling that drive a very complex interplay. Even more astonishing is the fact that only a small number of pathways are able to instruct incredible biodiversity that is not just magnificent, but also functional.

The Extraordinary Monarch Butterflies
The southern journey of the monarch butterfly is probably one of the longest routes taken for any in...
The Complicated Artistry of Butterfly Wing Patterns and Colors
Butterfly patterning and coloring comes from a few specific genes; however, it’s not just the gene...
What’s in your Yard? Planting More Native Plants to Boost Biodiversity
In the U.S., over 900 plant species are listed as endangered or threatened. When compared to more th...
Good Storytelling Transports Us to Another World
Our brain appreciates good storytelling. Storytelling is not just using words and actions to tell st...