Have you ever caught fireflies in the summer and watched as they crawl over your hands? It’s fascinating to watch them flashing their light in the dark.

In the late 1940s, Dr. William McElroy, a scientist at Johns Hopkins University, was curious about this natural phenomenon and paid children to catch fireflies for his research. After accumulating a sizable collection, Dr. McElroy extracted the illuminating compounds essential for the glowing reaction and discovered the science behind the flash.

He saw flashes of greenish-yellow light while conducting his research. The light would flash, and then disappear almost as quickly. To prevent the light from disappearing quickly, he added a compound, Adenosine Triphosphate (ATP). He concluded that ATP acted as an energy source to produce the light in fireflies. After his discovery, Dr. McElroy continued his research on illuminating compounds from fireflies and other organisms.

In the 1980s, Dr. McElroy helped other research teams to clone genes that produce the illuminating enzyme, called luciferase, from beetles. One research team led by Dr. Marlene DeLuca successfully cloned the firefly luciferase gene into several organisms, including Escherichia coli and tobacco plants. Another team cloned the luciferase genes from a Jamaican click beetle into bacteria and made the bacteria glow four different colors (green, yellow-green, yellow, and orange). Since then, scientists around the world have borrowed the light producing chemicals from fireflies to guide their research in a wide range of organisms, from bacteria to parasites.

Fireflies are not the only organism in the world that emits light. Other organisms such as algae, jellyfish, mushrooms, shrimp and glowworms also use give off a beautiful array of multicolored light.

The chemical production of light by a living organism is called bioluminescence. Luciferin, meaning light bearer, acts as a substrate (a molecule that an enzyme acts upon) for bioluminescence reactions.

Luciferin-Luciferase System of the Firefly P. pyralis. Luciferin is oxidized by the luciferase enzyme in the presence of ATP and oxygen. This reaction leads to the excited state of oxyluciferin. As a result, the light is produced.

The second type of bioluminescent reaction doesn’t need a luciferase enzyme, instead the reaction uses a ‘pre-charged’ compound called photoprotein. Photoprotein consists of a substrate, the enzymatic complex, and oxygen. The binding of an agent, typically calcium ions, causes changes of the photoprotein structure. It triggers an oxidative decarboxylation reaction, which leads to the excited state of the product. As a result, this chemical reaction produces the light. The jellyfish Aequorea uses the second type of bioluminescent reaction and requires calcium ions to produce light. 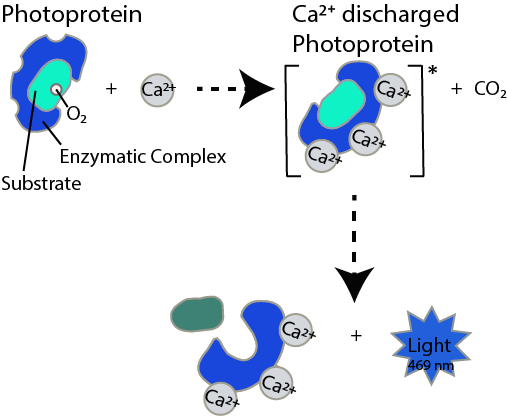 Phototoprotein System of the Jellyfish Aequorea. Three calcium ions bind to the binding sites of photoprotein, changing the photoprotein structure. It leads to the excited state of the product. As a result, this chemical reaction produces light.

Bioluminescence attracts scientists in a wide range of research fields from biotechnology to medical research. Since it is hard to visualize and track small molecules inside the cell (because the appearance of cells and their organelles are typically clear under a microscope), scientists fuse a molecule of interest to a gene that synthesizes a bioluminescent protein, such as luciferase. The scientists can then add luciferin to the cells to make the small molecule visible by producing the glow in the cell.

It’s not surprising that the luciferin-luciferase system has been incorporated into so many different molecular biology methods. Scientists use it to shed light on new discoveries as well as improve many existing research methods. Recent medical research studies have incorporated the luciferin-luciferase system to solve old dilemmas, such as antibiotic resistance or anti-parasite drug resistance.

The Search for a New Antibiotic Resistance Treatment

There are three commonly used tests for antibiotic susceptibility testing:

Disc Diffusion Method (Kirby-Bauer Test). Bacteria are grown in growth media agar plates. Discs containing antibiotics are placed onto the surface of agar. Zone of inhibition, a clear area around the disc, is measured.

This increasing followed by decreasing pattern of extracellular ATP only occurs in living bacteria. The concentration of ATP remains constant during the stationary phase when the bacteria are dead.

In the reported bioluminescence method, the ATP concentration was measured based on the luciferin-luciferase system with luciferin as a substrate. When the ATP produced by bacteria increased, the amount of light measured also increased. The advantage of this bioluminescence method is it takes a very short time to get a result (less than 1 hour after the addition of the antibiotic) compared to the standard methods of resistance detection.

Development of an Anti-Parasitic Drugs and Vaccine

World Health Organization reported in 2018 there were an estimated 228 million cases of malaria worldwide and the estimated number of malaria deaths was at 405,000. It doesn’t help when the development of resistance against anti-malarial drugs and insecticides keep increasing. Discovering a new anti-malarial drug or a malaria vaccine is one of many possible solutions to help the ongoing effort to treat this terrible disease. A biological assay as an initial or secondary screen is required to test a new drug or vaccine in animal models, such as mice. To perform this bioassay, scientists must develop a rapid (less than one hour) and accurate way to quantify the presence of parasites in the animal blood (parasitaemia).

Three commonly used tests to detect parasitaemia in mice are:

In 2019, Caridha et al. developed an improved method to quantify parasitaemia in mice, measuring the bioluminescence signal in treated mice. In their research, mice were infected with transgenic malaria parasites producing luciferase. The mice were then injected with luciferin at 10 minutes prior to imaging so that the luciferase-luciferin chemical reaction inside the mice produced a measureable bioluminescence signal. The signal increased in mice for up to 7 days post-infection, meanwhile it took around 6 days post-infection for some mice to show severe malaria symptoms.

The use of this bioluminescence method can help scientists to follow the progression of parasitaemia to detect sick mice that have yet to show any obvious malaria symptoms. This method is relatively simple and faster compared to other methods, although it requires special equipment to detect the bioluminescence signal.

FROM NATURE TO A RESEARCH TOOL

Dr. William McElroy might have started his research on light production of fireflies out of curiosity, and his discovery might have only been about a basic chemical reaction. However, there is no doubt that if he hadn’t taken an interest in investigating this phenomenon, the luciferin-luciferase system wouldn’t have become the helpful research tool for scientists and scientific research that it is today.

Using Firefly's Light to Find a New Cure
Have you ever caught fireflies in the summer and watched as they crawl over your hands? It’s fascina...
Shooting ‘Poison Arrow’ Drug to Kill Superbugs
Antibiotic resistance has become our worst nightmare worldwide. In hospitals around the world, curre...
How Do Bacteria Develop Antibiotic Resistance?
An antibiotic is an antimicrobial chemical that kills or inhibits the growth of microorganisms. Anti...
15 Great Biological Discoveries that Revolutionized Life Science
In the long history of biology, there have been so many amazing discoveries! Advancements in the ori...