The Hidden Wood Wide Web of the Forests

Underneath a forest lies a giant social network, although it's unnoticeable to us. Similar to how our internet connects us, this hidden network supports a whole community by connecting one tree to other trees.

Forests are so much more than a large area covered with trees—they are a precious home for 80% of terrestrial biodiversity.

Our forests are incredibly valuable for many living organisms. They supply food, water, wood, and the air we breathe. They are essential in mitigating climate change by acting as a carbon sink, which means they absorb carbon dioxide and other gases causing changes in climate patterns.

Without forests, many species would disappear due to the loss of their habitat. In addition, the loss of massive forest area can affect the water movement from oceans to our land.

Deep under the forest, an underground network becomes a link for mature trees to share essential supplements to their offspring and exchange information with their neighboring trees.

Consequently, losing pieces of this network could make a forest more vulnerable to many incoming threats and invaders, such as pathogens and insect pests.

What is the Wood Wide Web?

Trees in the forest share resources by using an underground network. A scientist from the University of British Columbia, Dr. Suzanne Simard, revealed this network and called it the wood wide web (Simard et al., 1997; Beiler et al., 2009).

In the wood wide web, mycorrhizal fungi colonize the plant roots and their tiny fungal filaments, or mycelia, connect hairy root tips of different trees together.

Mycorrhizal fungi refer to the role they play in the plant’s root system—as symbionts. These root-associated fungi are harmless to plants. Instead, they form harmonious symbiotic relationships with plants. 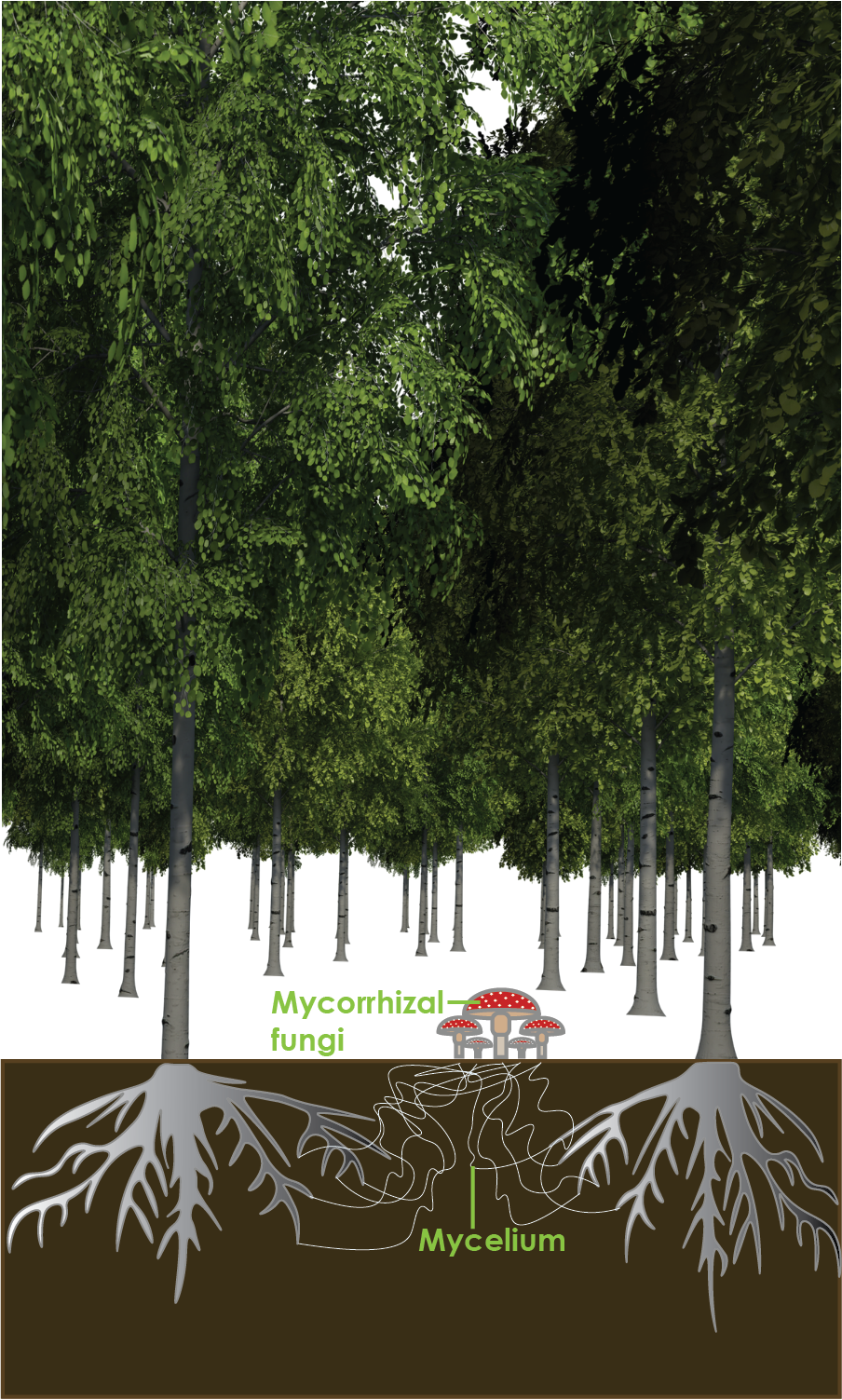 How Does the Wood Wide Web Work?

The wood wide web works by offering a win-win situation for all parties: mycorrhizal fungi and trees. The fungal filaments transport nitrogen, phosphorous, water, and other hard to-capture nutrients from the soil to the trees, in exchange for carbon-rich sugars made by the plants.

The fungi also help deliver substances from one tree to its neighboring trees. By using the network, mature trees feed their seedlings with nutrients to boost their survival (Bingham et al., 2012). When a plant is sick or dying, it can allocate its nutrients to the other plants nearby through the wood wide web (Newman & Eason, 1989).

How Do Trees in the Forests Talk to Each Other?

A tree in the forest communicates by releasing chemical signals. The way it functions is probably almost similar to the trees on Pandora from James Cameron’s “Avatar” movie released in 2009.

By using the underground mycorrhizal networks, a tree can send stress signals, including defense enzyme activities, to healthy neighbors (Song et al., 2015). After receiving these signals, the neighboring trees activate their defense response to avoid danger, such an attack from an insect pest (Song et al., 2014).

Trees can also use this network in a war against invading competitors. Some trees, such as walnuts, defend their territory by releasing a toxic substance via the fungal network to get rid of the unwanted neighboring trees (Achatz et al., 2014).

The reason behind many interactions in the wood wide web remain a mystery. As an example, researchers from Auckland University of Technology discovered one leafless Kauri stump in a New Zealand forest was kept alive by its neighboring trees (Bader & Leuzinger, 2019).

They found that the stump had grafted its roots onto the roots of its neighbors, which then provided it with water at night and nutrients in the day.

Although it’s hard to explain why the neighboring trees keep the stump alive, the mechanism behind this phenomenon is more likely due to the wood wide web (Bader & Leuzinger, 2019).

In western Canada, stump removal, or stumping, is one common method for managing the forests and preventing the spread of diseases, such as root rot (Modi et al., 2020). One concern for using this approach is whether it will also remove beneficial fungi in the surrounding area (Modi et al., 2020).

The researchers later found stumping significantly altered overall fungal diversity in the stumped plots, when compared to unstumped control plots. They noticed that stumping actually decreased fungi living on decaying materials, but increased mycorrhizal fungi. Therefore, stumping can be a beneficial method to preserve mycorrhizal fungi in the forest management in Canada.

To understand how the wood wide web works in a large scale and direct efforts to manage forests, scientists generated a global map by using a database of over 1.1 million forest plots from more than 70 countries (Steidinger et al., 2019). The results of this study demonstrated the distribution of two types of mycorrhizal fungi: ectomycorrhizal fungi (EM) and arbuscular fungi (AM) in the world.

Ectomycorrhizal fungi dominate forests in seasonally cold and dry climates, decompose organic matter slowly, and retain more carbon in the soil. However, they are more vulnerable to a climate change.

One of the scientists involved in this project, Dr. Thomas Crowther, reminded us that as the temperature of our planet gets warmer, EM-associated trees could be replaced by AM-associated trees. Perhaps, this change could accelerate a climate change at an even faster rate.

Grant, R. (2018, February 21). Do Trees Talk to Each Other? Smithsonian; Smithsonian.com. https://www.smithsonianmag.com/science-nature/the-...

The Hidden Wood Wide Web of the Forests
Underneath a forest lies a giant social network, although it's unnoticeable to us. Similar to how ou...
Uncovering the Mystery Behind Glow-in-Dark Fungi
More than 2000 years ago, Aristotle wondered about “a cold fire,” illuminating from the woods. He re...
What’s in your Yard? Planting More Native Plants to Boost Biodiversity
In the U.S., over 900 plant species are listed as endangered or threatened. When compared to more th...
Mangroves – The Buffering Superheroes of the Ocean
Today, the devastating effects of rising man-made carbon dioxide (CO2) emissions, more technically...