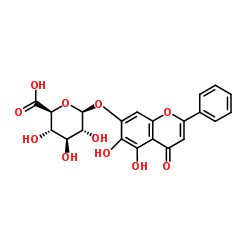 Baicalin is a flavone glycoside formed from the glucuronidation of baicalein. It has an array of properties which include promoting cell survival and bolstering the immune system. One of the effects that baicalin produced with in vitro studies of pathogens and in vivo studies on rats and mice was an elevation in cell survival, which implied the prevention of cell death due to induced apoptosis or the accumulation of oxidative species. Apoptotic repression occurred in rats due to a decreased expression of proteins within the CHOP (C/EBP homologous protein) pathway. Stimulating the synthesis of endothelial nitrogen oxides (eNOS) and other nitrogen oxides quell oxidative stress with the termination of free radicals.

Additionally, protective effects of baicalin have specifically diminished injury in the hippocampal area. Baicalin has been shown to stimulate the expression of Bcl-2 (B-cell lymphoma-2) which regulates apoptosis. It has also been shown to decrease miR-497 expression and cleave caspase-3 protein synthesis. These play roles in regulating gene expression and nervous system cell apoptosis respectively.

Enhancing the immune response with baicalin has proven effective in two ways. One observed effect was the induction of IFN-γ cytokine production in mice, a cytokine which activates macrophages and MHC II (major histocompatibility complex II) expression. Lysozyme bacteriostatic duration was shown to increase when exposed to increasing concentrations of baicalin. 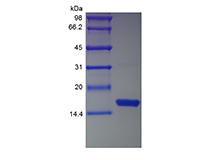