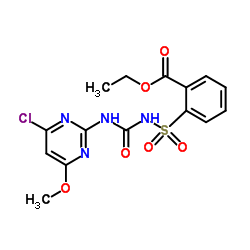 Chlorimuron ethyl is a sulfonylurea organic compound used as an insulin enhancing compound and also for herbicide. Promotion of insulin release by chlorimuron ethyl occurs by inhibiting ATP-sensitive potassium channels, which depolarizes the cell membrane of β-islet pancreatic cells. Depolarization is followed by a large influx of calcium that signals the cell to exocytose insulin vesicles.

Chlorimuron ethyl has also been used to induce plant death by inhibiting acetolactate synthase (ALS). The enzyme ALS synthesized branched chain amino acids, such as valine and leucine, which are integral to forming key enzymes in photosynthesis and aerobic respiration. Scarcity of these vital amino acids leads to reactive oxygen species generation and diminished DNA synthesis.