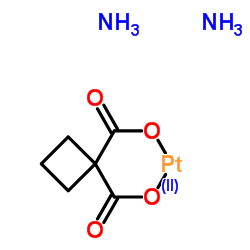 Carboplatin is an alkylating agent that is used as a chelating agent as well as a chemotherapeutic compound for its antineoplastic effects. While the exact mechanism of antineoplastic activity is still not well understood, it is believed to behave similarly to cisplatin which binds DNA and prevents its transcription and replication.

Carboplatin is also believed to generate free radicals from the attached platinum atom. Despite the uncertainty with carboplatin’s mechanism, it has shown to be highly effective antineoplastic compound when paired with paclitaxel (GoldBio Catalog # P-925) and bevacizumab (GoldBio Catalog # B-600).