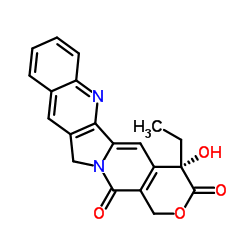 Camptothecin is an alkaloid compound used as an anti-cancer agent. It is a topoisomerase I inhibitor in DNA synthesis. Camptothecin has been shown to bind and stabilize a topoisomerase I-DNA complex in vitro, preventing the enzyme from reannealing DNA strands. This inhibition specifically effects the S-phase of cell development and ultimately results in apoptosis due to damaged DNA.