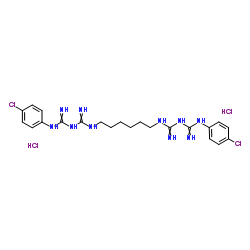 The compound functions as a bactericidal agent by interacting with the negatively charged bacterial cell wall. Contact of the cationic salt with the cell wall causes cytosolic leakage at low chlorohexidine HCl concentrations and cell lysis at higher concentrations. Duration of antibacterial effects has been shown to be enhanced by incorporating chlorhexidine HCl into human albumin microspheres. This lengthened antibacterial activity against Escheria coli, Staphylococcus aureus and Pseudomonas aeruginosa.