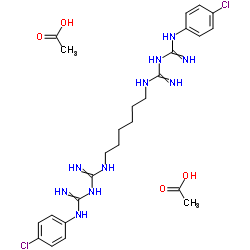 Chlorhexidine diacetate salt is a diacetate derivative of a cationic polybisbiguanide that has bactericidal, anti-fungal and anti-viral activity. It has also been used for in vivo pharmacokinetic research to investigate drug release rates.

Chlorhexidine, when placed into physiological pH, dissociates into its cationic form and binds to the negatively charged bacterial wall. This binding will cause cytosolic leakage at low concentrations and lytic effects at high chlorohexidine concentrations. However, chlorhexidine activity can be halted upon interaction with anionic compounds.