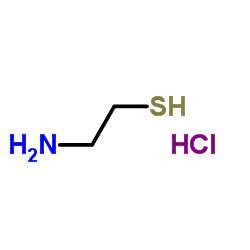 Cysteamine Hydrochloride or cysteamine is a mercaptoethylamine hydrochloride salt reductant that forms in mammals from pantetheine formation by degrading Coenzyme A. It has been used as a cystine depleting agent as well as a somatostatin inhibitor.

Cysteamine has been shown in vivo to remove accumulated cystine in lysosomes by forming disulfide bridges with cystine. The interaction between cysteamine and cystine forms cysteine and cysteine-cysteamine mixed disulfide which can freely exit lysosomes.

NOT FOR HUMAN USE