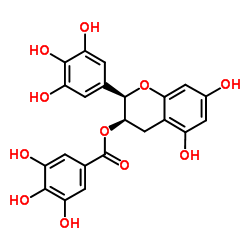 Epigallocatechin gallate (EGCG) is a catechin compound of the flavonoid family and is extracted from the green tea plant Camellia sinensis. It has been used as an anti-cancer, anti-viral and anti-bacterial compound. The cababilities of EGCG have been shown to be caused through antioxidant activity, enzyme inhibition and stimulation of specific metabolic pathways.

EGCG anti-cancer activities are exerted through controlling cell signaling pathways. It has been shown that EGCG directly inhibits cyclin dependent kinases and induces apoptotic proteins p21 and p27. EGCG has also been used to trigger apoptosis by Bax oligomerization which subsequently caspase activation.

Anti-viral activities observed in EGCG occur by inhibiting RNA polymerase and neuraminidase, a key influenza enzyme. EGCG has also been shown to prevent the fusion of viral membranes to host cells and to terminate reactive oxidative species (ROS) produced by oxidative stress. Its anti-viral capabilities were heavily dependent on a galloyl group present on the catechin skeleton.

EGCG has been shown to have a broad spectrum of antibacterial activity against gram positive and some gram negative bacteria. It is used synergistically with penicillin binding protein inhibitors because both target peptidoglycan on the cell wall. While the exact mechanism is not known, research on EGCG activity indicates bacterial cell wall damage by direct peptidoglycan binding.