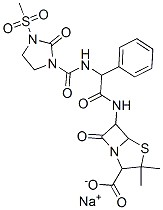 Mezlocillin sodium is an extended-spectrum β-lactam antibiotic of the penicillin family. It targets gram-negative and gram-positive bacteria.