How to Troubleshoot Restriction Enzyme Based Cloning Problems 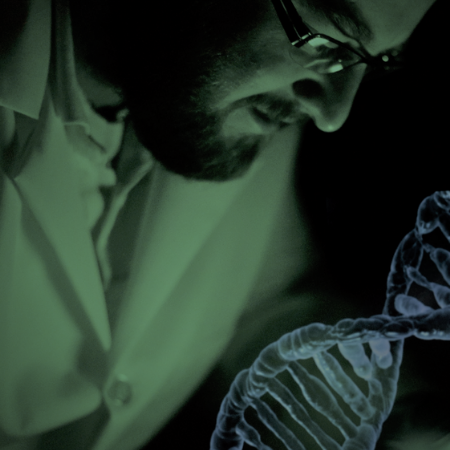 The first step before you clone is usually choosing which restriction enzyme to use, and the type of digested products you want.

Digestion by restriction enzymes can generate either sticky ends or blunt ends on a DNA fragment. Sticky ends have short single-stranded tails (or overhangs) at each end of the DNA fragment. When those sticky DNA ends are complementary to the digested ends of your vector, you can easily ligate (join or connect) the DNA fragment and the vector together. 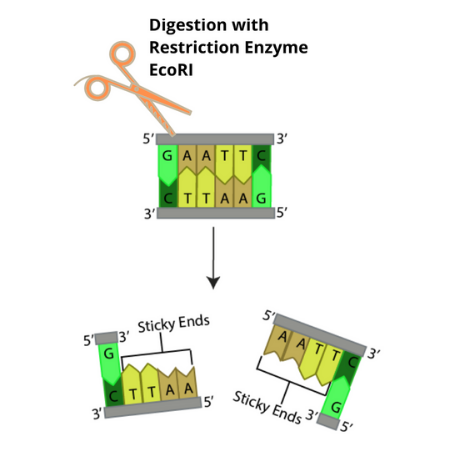 Below are a list of commonly used restriction enzymes generating sticky ends:

Blunt ends don’t have any overhangs on both ends of a digested DNA fragment. There is no requirement for blunt ends of a DNA fragment to be complementary to the other DNA ends for ligation. However, blunt ends are much harder to ligate than sticky ends. 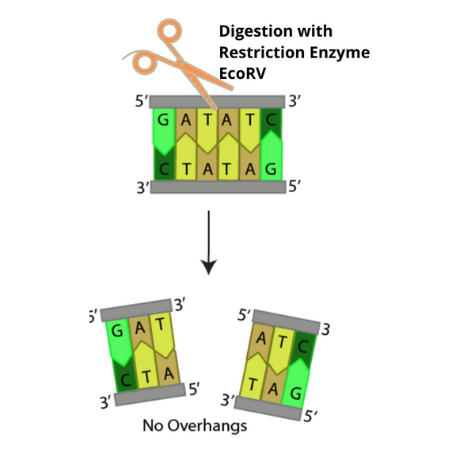 Below are a list of some commonly used restriction enzymes generating blunt ends:

The 6 Steps of Restriction Enzyme Based Cloning

1. Preparation of a Vector

You can prevent the digested vector from self-ligating during ligation of the DNA fragment and plasmid with an extra step. This step involves alkaline phosphatases, which removes phosphate groups from 5’ end of the vector.

2. Preparation of a DNA Fragment

When the PCR step is complete, digest the purified PCR products using the same restriction enzyme as the ones used during the vector preparation step. Then purify the digested products by using gel electrophoresis.

For information about the differences between the types of competent cells, take a look at our “Introduction to Competent Cells” article.

5. Selection of the colonies with the plasmid

Transformed bacteria can be cultured in media and on agar plates containing an antibiotic selection agent. Only the bacteria that carries the vector survive this selection. Take a look at our “A Quick Overview of Molecular Cloning” article for more information about how antibiotic selection and molecular cloning works.

Screen clones with your desired recombinant DNA by exposing the bacteria to X-Gal and IPTG (blue and white colony selection) and pick only the white clones. We have a great protocol available that details how to perform blue-white screening.

To further confirm the presence of the correct DNA fragment in the plasmid from those white clones, you can perform PCR screening, restriction digestion or DNA sequencing. After screening your desired clones, you can grow the clones using liquid media and extract the recombinant DNA for further application.

Troubleshooting for Restriction Enzyme Based Cloning

Below are six common cloning problems and tips to solve them:

1. Incomplete or No Digestion of PCR Product

2. Incomplete or No Digestion of Plasmid

4. Too Many Colonies with Empty Vectors (No DNA Fragment-Vector Ligation Occurred)

5. No Colonies or Too Few Colonies

How to Troubleshoot Restriction Enzyme Based Cloning Problems
Since the early 1970s, restriction enzymes have become an important part of cloning and many other a...
A Quick Overview of Molecular Cloning
Molecular cloning is a basic technique in molecular biology and biotechnology laboratories. It is a...
Molecular Cloning: A Detailed Introduction
Molecular cloning is a primary procedure in contemporary biosciences. This involves introducing a sp...
Overview of T4 DNA Ligase: What it is, how it works, reactions, and more
T4 DNA ligase is an enzyme that fixes broken DNA and seals it – similar to super glue. This particul...