Transduction for genetic engineering of bacteria, over the years, has been standardized using the model bacterium E. coli and the bacteriophage P1. This has resulted in P1 becoming a very well-characterized tool.

To facilitate optimal transduction of a DNA fragment of interest from one bacterial strain to another using this bacteriophage system, scientists have devised numerous innovations in the experimental procedure. The most important among these is creating a mutant of P1 called P1vir, and using that in place of P1 for transduction.

Why P1vir is used instead of P1 for transduction

Importance of the selectable marker in the P1vir transduction process

How is the fragment of interest engineered in the host bacterium for transduction to the recipient?

Characteristics necessary in the recipient cell for P1vir transduction

Why P1vir is used instead of P1 for transduction

The lytic cycle is required for transducing the fragment of interest from the host bacterium’s genome into the recipient bacterial cell.

However, the P1 bacteriophage is temperate, meaning it can infect by both lytic and lysogenic cycles. To restrict the infection cycle exclusively to the lytic form, a vir mutation has been made by scientists creating the phage variant P1vir.

This P1 variant can infect only through the lytic cycle. P1vir, rather than P1, is the actual bacteriophage used regularly in the lab for transduction procedures.

Using P1vir as an example, we shall discuss how a typical transduction procedure is performed in a laboratory setting.

Figure 1 Schematic diagram of a typical transduction procedure in the laboratory for genetic manipulation of bacteria.

For greater clarity, each part of the above figure is described in snippets below.

The donor bacterial cell has a selectable mutation (commonly made using Lambda Red Recombineering) in its chromosome that needs to be transduced to the recipient (as shown in figure 1). This donor cell is infected with the bacteriophage, which will eventually lead to donor cell lysis. 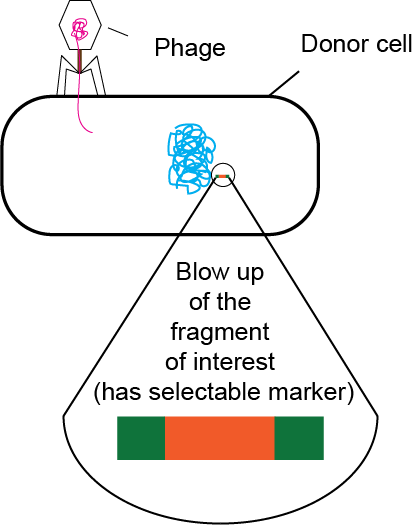 While most phage particles coming out of the lysed donor cell pack their own genetic material in their capsids, a few will pack parts of the donor cell’s chromosome. The latter are known as transducing particles.

When recipient cells are infected with the lysate from the donor, they may be infected by one of three ways: 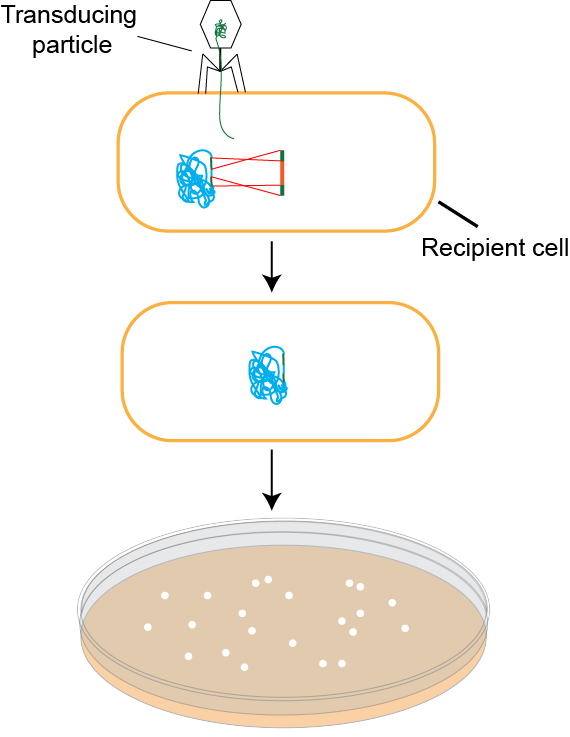 B) The second way is for a transducing particle that carries part of the donor’s chromosome (shown in blue) other than the desired selectable mutation. In this case, though this recipient cell will be a transductant, it will die when plated on selective media because it does not have the selectable marker (antibiotic resistance, in this case) needed to survive the selection pressure. 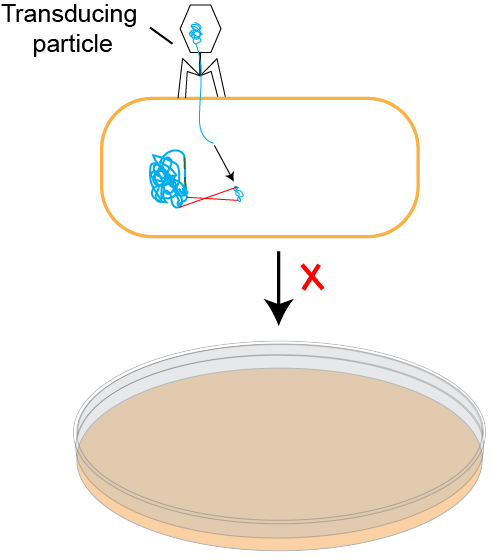 C) In the third case of infection, the phage carries its own genome instead of packing parts of the donor bacterium’s genome. In this scenario, the lytic cycle will commence leading to the recipient cell’s lysis. 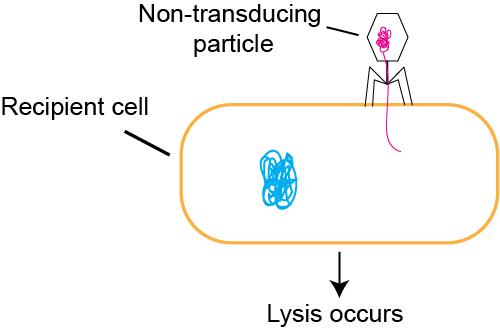 DNA fragments of interest of up to 100 kb can be packed in its capsid and transferred from one strain to another.

P1vir has been engineered to infect bacteria exclusively through the lytic mode. This is critical to ensure transduction of the DNA fragment of interest from the host cell’s chromosome to the recipient cell.

Importance of the selectable marker in the P1vir transduction process

Fragments that are transmitted from the donor to the recipient strain need to be associated with a selectable marker for positive selection of the required transductants.

Figure 2 demonstrates the importance of the selectable marker in the process of transducing a desired chromosomal fragment of interest from the donor bacterium to the recipient.

The other two types of phages in the donor lysate are transducing particles (green and blue).

The second type of transducing particle in the donor cell lysate are ones which pack part of the host cell’s chromosome other than the locus having the selectable marker.

Please note that the donor strain lysate contains phages that pack random parts of the donor’s chromosome (transducing particles shown in blue in the figures above). These phages induce transduction of other parts. Such fragments, once transduced into the host, recombine with their corresponding homologous regions in the host chromosome. These are non-desired transductants. And because these do not have the selectable marker, they fail to grow on the selection plate. Therefore, using a selectable marker such as an antibiotic resistance cassette, desired transductants can be differentiated from and selected over undesired transductants.

How is the fragment of interest engineered in the host bacterium for transduction to the recipient?

Fragments typically transduced are genes that have been substituted with an antibiotic resistance cassette.

Another example of how a fragment of interest is engineered for transduction into the host is as follows. In this case, a gene locus in the host cell’s chromosome needs to have a point mutation made, rather than a full deletion as in the previous example above.

Such a point mutated allele is first engineered in the donor’s chromosome, most commonly using Lambda Red Recombineering. Further, an antibiotic resistance marker is introduced into the donor’s chromosome to closely flank this mutated allele. Whenever that mutant allele is transferred via transduction, the linked selectable marker is also co-transduced to the recipient simultaneously.

Lambda Red Recombineering is commonly used to create these selectable mutations in the host bacterial strain. Once suitably mutated using Lambda Red, the host strain is infected with P1vir to transduce that mutation to a suitable recipient bacterial strain.

Characteristics necessary in the recipient cell for P1vir transduction

The first characteristic is that the recipient bacterial cell cannot be a recombination mutant, that is, a cell that lacks adequate machinery for genetic recombination.

The reason this is important is because once the transducing particle injects the donor’s genetic element into the recipient cytoplasm, the donor’s recombination machinery is required for incorporation of the fragment into its chromosome.

Scientists, over the years, have devised ways to optimize transduction using the P1 bacteriophage as a tool. One critical improvisation is the mutation of P1 to P1vir. Some other experimentalconsiderations for successful transduction using this method are described in the following sections.

In this article we learned how genetic mutations can be effectively transmitted from one bacterial strain (donor) to another (recipient) using transduction with P1vir as a classic example. To put things into a holistic perspective, the next question to answer is: how such mutations can be made in the donor bacteria’s chromosome in the first place?