A Guide for Choosing Between Commonly Used Antibiotics

When it comes to choosing between common research antibiotics, there are a few guidelines that can help you make a decision. The most important deciding factor depends on what you are selecting for and what antibiotics will be effective on all cells excluding the cells you wish to maintain. In this article, I will discuss the basics of common antibiotics including their mechanisms of action, when each antibiotic is going to be most useful, and what substitutions may be made for certain antibiotics.

Ampicillin is one of the most commonly used extended-spectrum beta-lactams, and it is composed of a thiazolidine ring and side chain that is linked to the beta-lactam ring. It is used to select for resistant bacteria in selection experiments. Ampicillin breaks down rather quickly so it is important to use ampicillin plates within four weeks for maximum activity. Satellite colonies may also appear when using ampicillin.

Bottom line: Both of these antibiotics are useful for prokaryotic selection experiments. Based on price, ampicillin is typically preferred unless you are working with experiments that require more stability, such as large-scale growth cultures for reduction of satellite colonies in which you would want to use carbenicillin. It is also important to consider price as a factor. While Carbenicillin typically costs two to four times the price of ampicillin, purchasing either research antibiotic through GoldBio can significantly lower the expense.

Cefotaxime is a third generation cephalosporin antibiotic that works by inhibiting cell wall synthesis similarly to other beta-lactam antibiotics. It will be most useful to you in prokaryotic selection experiments and to eliminate Agrobacterium tumefaciens in plant transformation experiments because it is the only cephalosporin that is not very toxic to plants at high concentrations. It is important to keep in mind that cefotaxime and other third generation cephalosporin antibiotics are effective against gram-negative bacteria.

Vancomycin is a glycopeptide antibiotic that is commonly used in plant tissue culture. It functions by hydrogen bonding to the D-alanyl-D-alanine C-terminus of the bacterial peptide preventing cell wall synthesis. While vancomycin is similar to cefotaxime in that it has low toxicity in plants, it differs because it is effective against gram-positive organisms rather than gram-negative.

Gentamicin vs. Streptomycin vs. Spectinomycin

Gentamicin, streptomycin and spectinomycin are aminoglycoside antibiotics that function by binding ribosomal subunits and inhibiting protein synthesis. This leads to formation of an improperly functioning bacterial cell membrane.

In research, gentamicin is typically used to prevent contamination of sterile cultures because it has a broad spectrum of activity and has high stability when placed under high heat during autoclaving. Gentamicin is also used to treat mycobacterial contamination in cell culture.

When combined with penicillin, a beta-lactam antibiotic, the streptomycin-penicillin combination is an effective inhibitor of bacterial infection in cell culture.

Spectinomycin is an aminocyclitol aminoglycoside antibiotic, which means it is composed of a carbon ring and amine functional groups. Resistance to spectinomycin is conferred in one of two ways: The first way is through an rpsE mutation that prevents the antibiotic from binding the ribosomal subunit. The second means of resistance is through the aadA gene that encodes the enzyme aminoglycoside-3’-adenyltransferase can make bacteria resistant to spectinomycin.

Bottom line: When compared to streptomycin combined with penicillin, gentamicin is still much more stable at low pH and more effective in controlling bacterial growth in tissue culture. Spectinomycin can also be substituted for streptomycin in some cases, and provides more stability, but when increased stability is not required, streptomycin should be used since it is much more cost effective.

G418 vs. Neomycin vs. Kanamycin vs. Hygromycin

G418, hygromycin, kanamycin and neomycin are all members of the aminoglycoside antibiotic class. They are typically effective in elimination of aerobic gram-negative organisms through inhibition of protein synthesis.

G418 inhibits protein synthesis in bacteria, fungi and a variety of other susceptible organisms such as protozoans, and some plant and mammalian cells. It functions by inhibiting the 80s ribosomal subunit and blocking synthesis of proteins. G418 is considered the standard antibiotic used for eukaryotic selection experiments. Resistance to this antibiotic is conferred through neomycin resistance genes.

Neomycin targets prokaryotic cells that do not express the neomycin resistance aminoglycoside phosphotransferase genes. These genes are typically used by molecular biologists in DNA plasmids in order to express cloned proteins in cell cultures because the neo genes are selectable markers. Neomycin and G418 both will target cells which do not contain these genes and they will be eliminated. In general, neomycin is used in experiments on prokaryotic cells, while G418 is used in eukaryotic experiments.

Kanamycin is an aminoglycoside antibiotic that functions by inhibiting translocation of the ribosome which leads to mistranslation. It is typically used to isolate bacteria that have been transformed with plasmids containing genes for kanamycin resistance. Resistance to this antimicrobial is through the aminoglycoside phosphotransferase enzyme KanR-Tn5, which inhibits its association with the bacterial ribosomes.

Hygromycin also inhibits protein synthesis in a variety of organisms including bacteria and fungi. The function of hygromycin varies slightly from G418 because hygromycin interferes with translocation causing mistranslation of the 80s ribosomal subunit, thus inhibiting protein synthesis. This difference in mechanism of action from G418 makes hygromycin most useful in dual-selection experiments where another selection antibiotic is also used. When antibiotics have different mechanisms of action, resistance is conferred in different methods making a subsequent selection process possible.

Puromycin is an aminonucleoside antibiotic that inhibits peptidyl transfer in ribosomes and also causes premature chain termination. This leads to inhibition of protein synthesis. This antibiotic is toxic against both prokaryotic and eukaryotic cells. Resistance is conferred through the pac gene, which encodes puromycin N-acetyl-transferase. Puromycin should be used to select for cell lines carrying the pac resistance gene, but can also be used for some E. coli selection experiments if they have been transformed with plasmids that carry the pac resistance gene.

Bottom line: Puromycin should be used to select for yeast and bacteria, especially E. coli, which confer the pac resistance gene.

Bottom line: Use this antibiotic for selection of resistant bacteria to study gene regulation using CAT assay and to study the peptidyl-transferase portion of bacterial ribosomes.

Nourseothricin is a streptothricin aminoglycoside antibiotic. This antibiotic causes miscoding and leads to the inhibition of protein synthesis. It is typically used to select for a variety of organisms including bacteria, fungi and plant cells. Resistance is conferred through the nourseothricin N-acetyl transferase ( NAT) gene, which inactivates the beta-lysine portion of nourseothricin through acetylating the beta-amino group. This antibiotic is useful in selection of cells which have been transformed to include this resistance gene.

Bottom line: You should use nourseothricin to select for organisms expressing the NAT gene. There is no cross-reactivity with other aminoglycoside antibiotics.

Using this guide, you can effectively decide which antibiotics are right for your experiment. Remember to take into consideration the genes you want to select for, what spectrum of activity each antibiotic has, and the relative stability of one antibiotic compared to similar antibiotics that may be used as substitutions.

Schafer TW, Pascale A, Shimonaski G, Came PE. Evaluation of Gentamicin for Use in Virology and Tissue Culture. Applied Microbiology. 1972;23(3):565-570.

A World in Which Papercuts Can Kill
The overuse of antibiotics has been debated in the biochemical and medical fields for decades, c...
Behind Honey's Healing Power
For a few millennia, mankind has used honey as food and a healing agent without knowing how it worke... 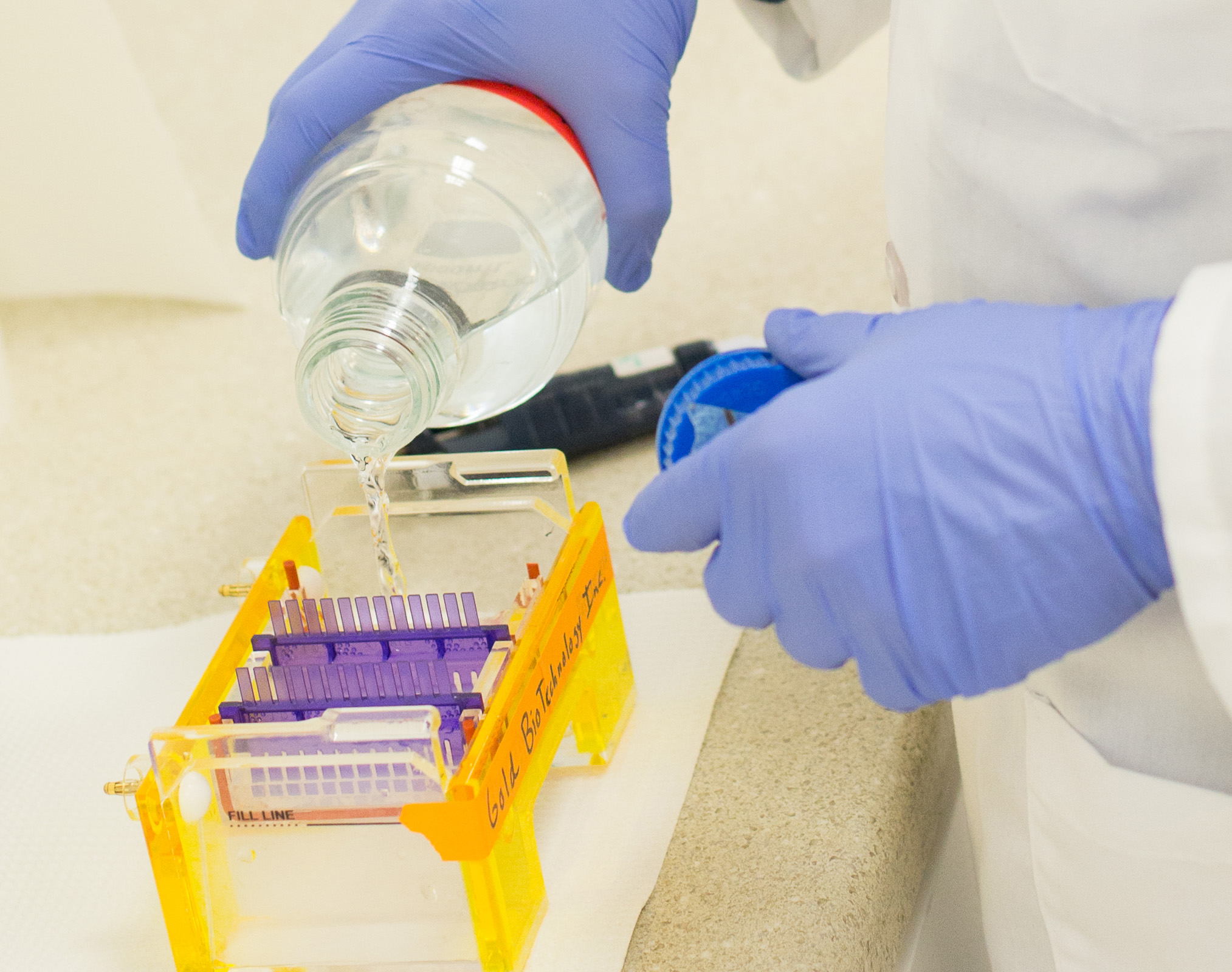