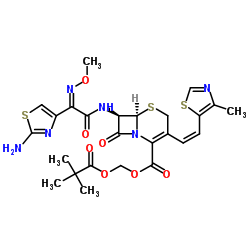 Cefditoren pivoxil is a β-lactam, cephalosporin antibiotic that has shown to be effective against an array of gram positive and negative bacteria. In vitro studies have exhibited cefditoren pixovil to have strong activity towards methicillin and penicillin-susceptible pathogens as well as penicillin-resistant Streptococcus pneumoniae.

Cephalosporins are a type of β-lactam antibiotic consisting of a four-membered β-lactam ring bound to a six-membered dihydrothiazine ring. This two-ring system causes distortion of the β-lactam amide bond, resulting in decreased resonance stabilization and increased reactivity. β-lactams inhibit the formation of peptidoglycan cross-links within bacterial cell walls by targeting penicillin-binding proteins or PBPs. Consequently, the bacterial cell wall becomes weak and cytolysis occurs. Cephalosporin compounds are less susceptible to β-lactamases than the penicillin β-lactam antibiotics.