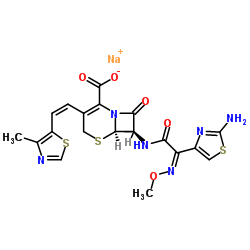 Cefditoren sodium is sodium salt of a β-lactam cephalosporin antibiotic that disrupts peptidoglycan synthesis of bacterial cell walls. Cefditoren sodium has been used in comparative studies to ascertain effectiveness of newly synthesized antibiotics as well as in vitro testing of antibiotic resistance in bacteria.