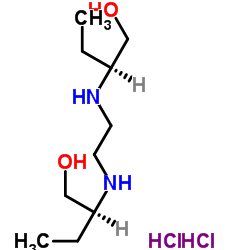 Ethambutol DiHCl is a hydrochloride salt form of an ethylenediamine derivative that is used as an anti-mycobiotic. It has been used for studying multidrug resistance in Mycobacterium tuberculosis and to investigate effective antibiotic combinations for ethambutol DiHCl.

It has been used for bacterial selection and its bactericidal mechanism is not well understood. Some research has found ethambutol DiHCl to inhibit mycolic acid transport into mycobacterial cell walls. Mycolic acid is a fatty acid chain that is a key component of mycobacterium’s resistance to many antibiotics and harsh conditions.