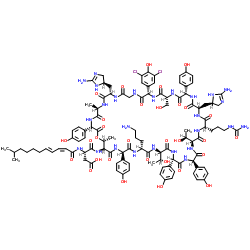 Enramycin is a polypeptide antibiotic that displays strong activity against gram positive bacteria, including methicillin-resistant Staphylococcus aureus (MRSA). It is produced by the fungus Streptomyces fungicidus as Enramycin A (EA) and Enramycin B (EB), with this product containing an approximate 70:30 ratio of EA to EB. Enramycin has been effective against antibiotic resistant bacteria by inhibiting peptidoglycan synthesis for bacterial cell walls.

Enramycin has been proposed to halt peptidoglycan synthesis by inhibiting transferase enzyme MurG or by inhibiting transglycosylase activity. Both inhibitory pathways entail enramycin binding to peptidoglycan precursors in a cell wall synthesis pathway. Some studies have shown that enramycin binds the precursor Lipid I and inhibits MurG. Enramycin has also been shown to bind the Lipid II and prevent transglycosylation of the precursor by tranglycosylases.