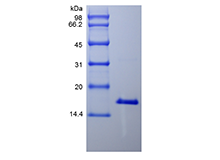 Human interleukin-21 (IL21) is encoded by the IL21 gene located on chromosome 4. IL21 is a pleiotropic cytokine produced by CD4+ T-cells in response to antigenic stimulation, and can regulate members of the immune system, like cytotoxic-T-cells or natural killer cells. Additionally, IL21 can induce division and proliferation in its target cells. IL21 elicits its effect through binding to the IL21R (IL21 receptor), which also contains the gamma chain found in other cytokine receptors such as IL2, IL4, IL7, IL9 and IL15. The IL21/IL21R interaction triggers a cascade of events, which includes the activation of the tyrosine kinases JAK1 and JAK3, which is then followed by the activation of the transcription factors STAT1 and STAT3. IL21 also seems to be an important player in clinical illnesses, including cancer immunotherapy, viral infections and allergies.

Sterile Filtered White Lyophilized Powder. Purified and tested for use in cell culture.