The Unseen Side of Plastic: Microplastics in Compost and Aquatic Systems

As I raked out fresh mulch into my garden bed last year admiring the rich cedar color that sculpted the area and highlighted brilliant flowers, the aesthetic was momentarily ruined by a fragment of plastic. I picked it out, threw it away and continued to rake only to find another, and another, and another. All I could think at the time was, cheap processing, and dismissed it. Later that fall, I noticed natural tree trash-combs along highways and a squirrel drey lined with a grocery bag. The plastic infestation is not a new story. What is interesting about it, however, is that the world’s exposure to plastic goes beyond what the eye can see.

Oluwaseun Esan of the University of Western Ontario recently explored the effects of plastic in a world within the world - the microbiome within compost that is. While Esan’s goal was to study how LDPE plastic (low-density polyethylene) impacts bacterial and fungal compost communities, his paper immediately mentions the damage degrading plastics cause soil environments and food chains as microplastics and potential toxins are released into these systems. Different types of plastics, when broken down, release different types of byproducts, some of which are toxic (see the figure below, which shows plastic codes, type and the potential chemicals).

Figure 1:
1: Polyetheylene terephthalate (PET or PETE) contains antimony. PET may also contain other estrogen-like chemicals. 2: High-density polyethylene (HDPE) does not contain BPA or phthalates and is regarded as a low-toxicity plastic. 3: Polyvinyl chloride (PVC) contains phthalates used to soften material. Phthalates may cause endocrine disruption. 4: Low-density polyethylene (LDPE) is not known to contain harmful chemicals. 5: Polypropyelen (PP) are not known to leach harmful chemicals. 6: Polystyrene (PS) is notably used for Styrofoam. Polystyrene contains styrenes which can cause neurotoxic, hematological, cytogenetic and carcinogenic issues. 7: Other or Polycarbonate (PC) is the catch-all plastic grouping. BPA may or may not be present in plastics with this code.>

Most mentioned in the news are BPA (bisphenol A) and phthalates. These chemicals have estrogen-like properties, which may impact reproduction, fetal growth and development, and neurological processes. While BPA is broken down after ingestion, a 2004 CDC study found that people have become increasingly exposed to the chemical. The CDC found small amounts of BPA in all urine samples tested. As a result of more media coverage centered around BPA, concerns over water bottles made with this material and its hazards to human health have led consumers to shop smarter and choose BPA-free options.

Other toxins released from degrading plastic include dioxin, styrene and PCB (polychlorinated biphenyl). These toxins leach into its immediate environment and the rate increases with temperature. Plastic pollution and waste management, therefore, is not just an issue at eye-level. It’s now an issue at the molecular level.

In oceans, plastic waste byproducts that diffuse into the water are ingested and absorbed by marine life. One study determined that HDPE (high-density polyethylene) plastic particles accumulate in the lysosomes of the blue mussel. Particle accumulation eventually caused the lysosomal membrane to break down and exposed degraded material to the cytoplasm, which led to cell death and heightened inflammatory response.

The consequence of plastic ingestion and absorption extended to predators. Paul Farrell of the University of Portsmouth observed “trophic level transfer of microplastic” from blue mussels to the shore crab, a predator of the mussel. While the amount of transferred material was small, Farrell noted that the material could translocate to other tissues within the crab.

Degrading plastic products leach into soil as well, and terrestrial organisms can help transport this material deeper throughout the environment. Once in the soil, the plastic particles and waste material can have a strong influence on soil behavior, further affecting microbes crucial to soil health. For instance, polyester fibers can provide structure for unnatural soil clumping leading to an increase in the amount of water retained by soil. These changes to soil properties and the ratio of plastic found in soil can lead to significant changes in microbial activity.

Besides plastic leaching and immediate microbial impact, many researchers are also trying to understand how the chemicals found in plastic are being processed by microorganisms within terrestrial environments. In Esan’s case, his research examined the impact of biodiversity and function within compost.

Compost is a remarkable, systematic process that involves specific nutrients, microorganisms, oxygen levels and temperature levels. The benefits of compost include better soil structure for plants and better defenses against soil-borne pathogens. To achieve these benefits, compost requires regular maintenance and a healthy distribution of specific microorganisms that play a key role in soil health.

Figure 2:
Mesophilic: The mesophilic stage is the first step in the compost process where bacteria grow around newly added organic material. Temperatures begin to rise as activity increases (Temperatures are marked to rise up to 110°F). Thermophilic: As temperatures rise, thermophilic bacteria rise in dominance. During this stage, microbial growth rapidly increases, raising temperatures up to 155°F. The increase in temperature helps kill pathogens and enhance soil health. Late Mesophilic: The late mesophilic stage or cooling stage. Mesophilic bacteria return in numbers and fungi begins to grow and break down undigested components such as lignin. Stabilizing/curing: During the final stage, temperatures begin to stabilize. This is an important step that helps naturally equip soil against pathogens. Maintaining a longer curing step (several months long) can increase soil quality. 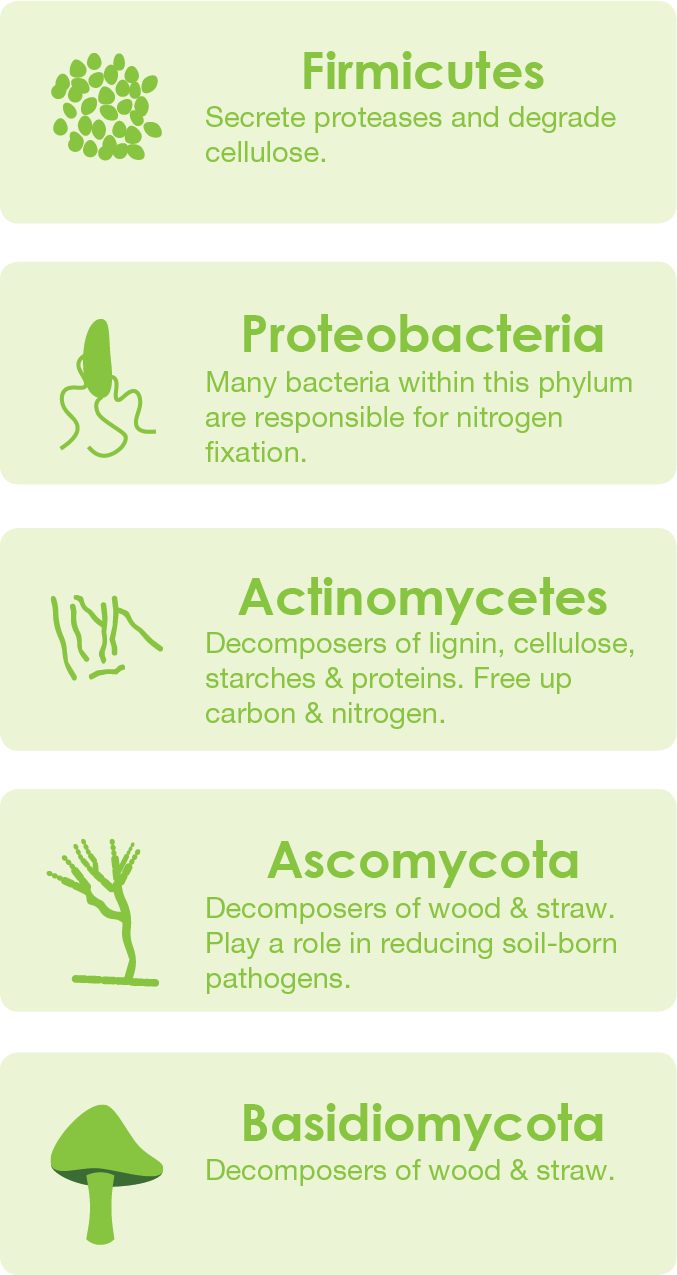 Major players in the bacterial world of compost peak and trough at various stages of composting, but their overall structure tends to remain consistent throughout properly kept compost piles. Firmicutes dominate the earliest stages of the compost process while Proteobacteria rise during the later stages. Other microbes present include Ascomycota and Basidiomycota, which decompose straw and wood and help reduce the risk of wood rot infection.

With plastic becoming more prevalent in commercial compost centers, Esan wanted to understand the relationships of these organisms and how their structure and behavior changed. What he found however, is that there wasn’t a significant change in structure caused by the presence of LDPE plastic, at least not from a composition standpoint. The relative abundance of each type of primary microbe appeared to remain about the same.

But there was a change in how microbial communities interacted with one another when plastic was present. His paper stated, “we found a large number of niche-specific microbial taxa producing both cooperative and competitive association only in bulk or [plastic associated] compost.” Compared to bulk compost, Esan found that cooperative behavior was more important in plastic associated environments.

It was only in plastic associated compost that Esan discovered a cooperative relationship between Firmicutes Baccillacea and Thermoactinomycetaceae. Because Baccillus is thought to be involved in the biodegradation of plastics, Esan believes the relationship between these microbes in plastic environments are adaptive and may provide better efficiency in breaking down plastic.

Though Esan’s research didn’t find any adverse effects on microbial biodiversity, this doesn’t mean plastic is harmless in soil environments. Researchers are still exploring the uptake and metabolic mechanisms involved in degraded plastic. Nobuyoshi Nakajima of the National Institute for Environmental Studies, Japan discovered that the root systems of tobacco seedlings are capable of absorbing BPA and translocating it to their leaves and stem. Using radio-labeled BPA, Nakajima observed high BPA concentrations on root surfaces, and after a longer incubation period BPA and BPA metabolite concentrations increased within the plant’s leaves. This research suggests plants, or at least tobacco plants, are able to take up BPA that seeped into soil and water.

Consider all the channels of exposure to BPA and other plastic waste products. It’s not just in aquatic and soil environments, how we use plastic is also problematic. Heat is one of the fastest ways to release plastic chemicals into surrounding systems, and we heat plastic all the time in dishwashers and microwaves.

Our world is fortified in plastic. Plumbing systems use PVC (one of the more toxic plastics), plant irrigation systems use plastic tubing, and we swim in vinyl-lined pools.

Trying to determine how hazardous estrogen-like plastic byproducts are has resulted in conflicting information. The FDA has approved plastic for food use. Further, they have reviewed many studies and determined that negative effects require higher amounts of exposure than what people regularly receive. Although more recent studies on mice have demonstrated that exposure to small amounts of BPA (or BPA-like chemicals) can cause adverse effects.

We aren’t necessarily doomed. While plastic is heavily incorporated into our livelihoods, not every type of plastic is full of BPA, phthalates and other toxins. Different governments are also increasing regulations on plastic production and use.

With BPA being one of the more concerning byproducts of certain plastics, Japanese manufacturers have been using natural resins to line cans. This initiative began in 1997, and a later review in 1999 found that levels of BPA (or BPA byproduct) in tested urine samples had significantly dropped.

Manufacturers have also worked to make and market biodegradable plastics (which is not the same as biobased plastic). International standards have defined tests to determine the compostability of plastics. A standard label, introduced by the Biodegradable Products Institute, has been developed to enable better recognition of compostable plastics. Only plastic material that strictly adheres to the ASTM D6400 standard are able to carry the label. In California, food packaging and plastic bags must demonstrate compliance if they are labeled “compostable.”

As we begin to notice the full degree in which plastic is entwined in nature, these regulatory efforts along with continued awareness and observation might curve our growing use of plastic. Already, people are becoming inspired to explore plastic alternatives and develop better management systems.

Banas, T. (n.d.). Which Plastic Containers Can I Safely Use? Retrieved April 5, 2019, from https://www.livestrong.com/article/158674-which-plastic-containers-can-i-safely-use/

The Science of Composting. (n.d.). Retrieved March 31, 2019, from https://web.extension.illinois.edu/homecompost/science.cfm

Reverse Transcriptase & cDNA Overview & Applications
Reverse transcription is a technique used by researchers to generate a complementary strand of DNA (...
The Unseen Side of Plastic: Microplastics in Compost and Aquatic Systems
As I raked out fresh mulch into my garden bed last year admiring the rich cedar color that sculpted...
Using Firefly's Light to Find a New Cure
Have you ever caught fireflies in the summer and watched as they crawl over your hands? It’s fascina...
A Quick Overview of Direct PCR
What is Direct PCR? Direct PCR (dPCR) is a method of DNA amplification directly from an animal...